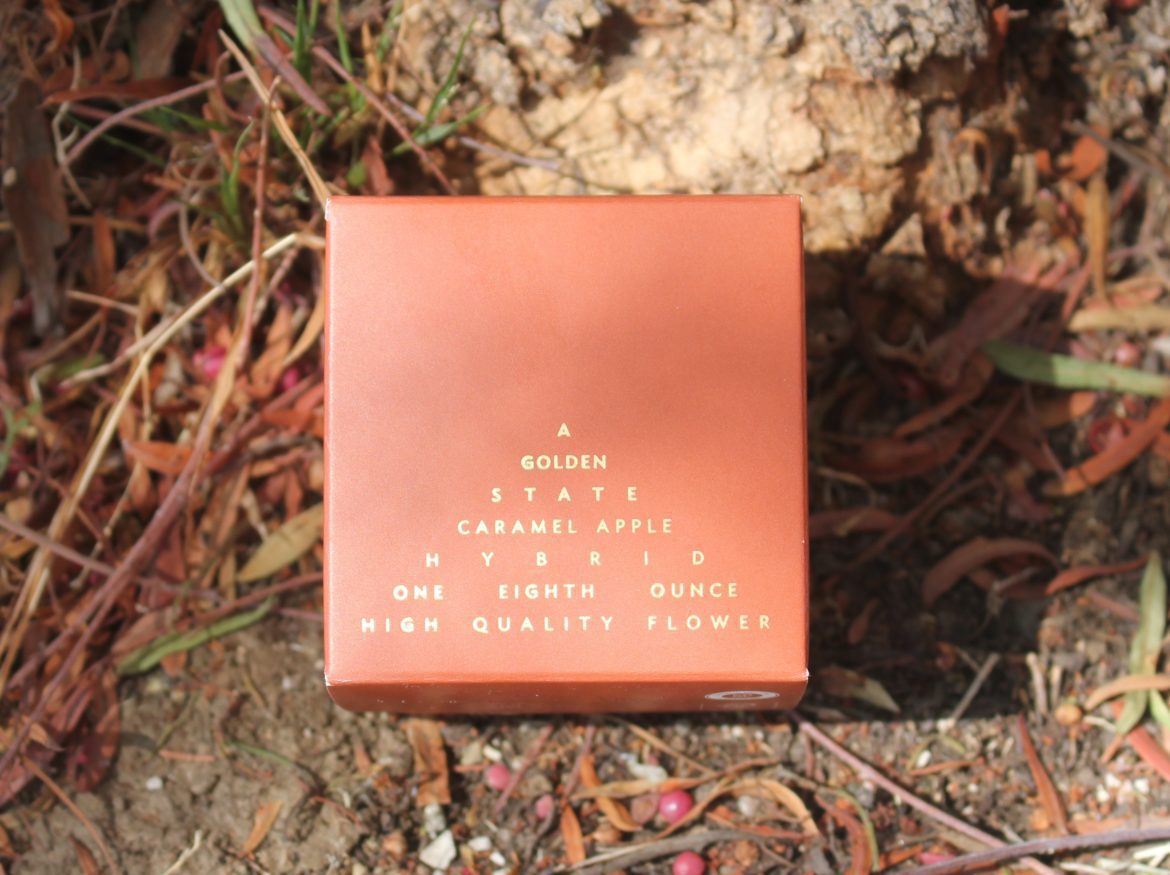 A Golden State raises the bar on both cannabis as wellness and the nuance and grace available on the top shelf.

Pay whatever it takes you to get your hands on it. Better than most eights at $60.

You deserve a treat-bite into A Golden State's Caramel Apple for pick up or free delivery with Emjay.

About A Golden State

“A golden state is not a brand or place. It’s a state of being.” Born in the shade of the Cascade Mountains in Northern California, A Golden State uses water from the Mount Shasta snowmelt to hydrate its plants. As an adamant connoisseur, A Golden State has carved out a distinctive space for themselves in the ever-expanding horizon of cannabis possibilities.

With robust educational resources on the basics of cannabis offered on their website, A Golden State seems as invested in cultivating the spirit of cannabis as much as the physical manifestation of its flowers. All plants have a spirit and this intangible essence of cannabis thrives in commune, in loving relation to the other plants and beings of this planet, in vibrational rhythm with the divine. A Golden State seeks to shepherd this spirit and the flowers that hold it.

A Golden State offers information on the terpenes most effective for each ailment cannabis can help with. It is this connection with its healing powers that make cannabis cultivators stand out from the pack. People who seek solely to get high are a dime a dozen. Checking out is cheap. But really digging into whatever is going on with this plant magic is where growers can stand out.

“Talk to God, God talks back”. Whatever your conception of divinity is, whatever Goddesses may be, this capital A Awareness is just that–an inseparable flowing presence-the one thing that is all things, and it is listening and responding to you (most likely) much more fully than you are listening and responding to it. Do you ever just get a feeling about something that turned out to be true but there were no discernable facts to pinpoint for your knowing?

The Brain-Gut Axis is garnering more and more attention from the scientific community and is of great interest for the more scholarly cannabis inquirer. With exciting new findings in The Polyvagal Theory as it relates to trauma and the very expression of our genetic code, The Vagus Nerve and everything that stimulates it is the next frontier in trying to use a laboratory to figure out just what the fuck is going on for the human.

A Golden State leans into this line of questioning by rolling up their sleeves in cultivating new strains and ways to talk about them. From Sunbeam to Night Sky, Lava Flower, and Mountain Showers, A Golden State is moving into new territory beyond the exhaustingly well-trodden paths. Although each eighth still comes with the “indica” or “sativa” insignia, A Golden State tells the full story of the flower to pay homage to its power.

Caramel Apple could not sound more delicious so let’s park the car and dive into the carnival. 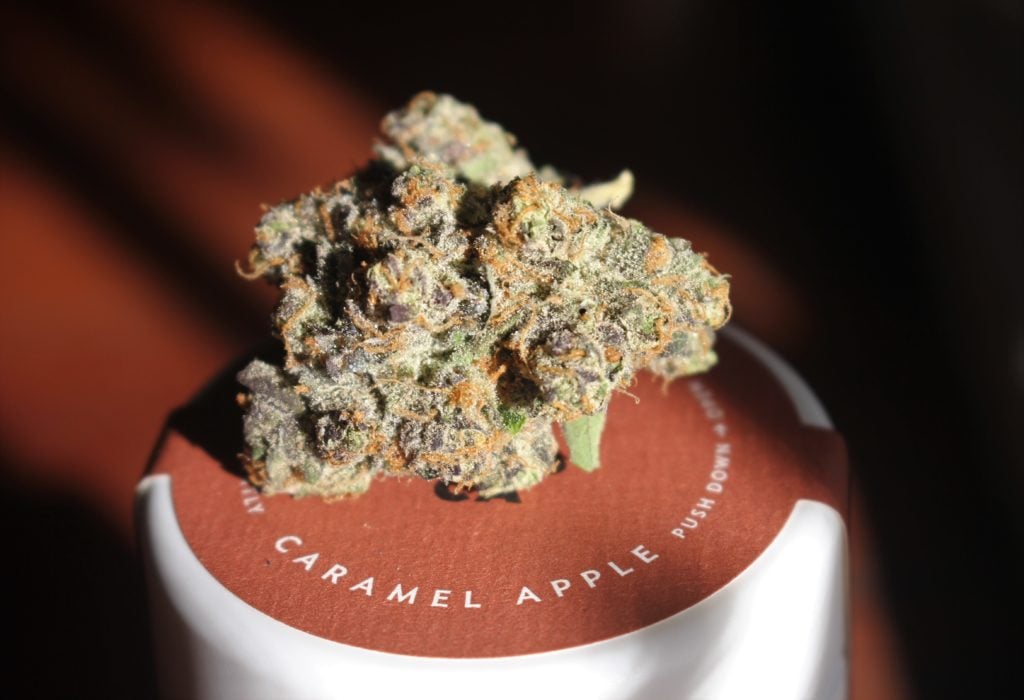 Inside A Golden State’s elegant outer box is an even more stunning and fantastic opaque matte white jar. A Golden State clearly and cleanly emphasizes the respect with which they hold their flower-this is the sophistication of high-grade wellness and the reverence with which they expect their flower to be treated. Like Young HOV said it’s lookin’ like wealth and Caramel Apple is intoxicating before you even break the seal. I’m not normally the material possessions type but A Golden State effortlessly encapsulates the ability of a product to make you feel dope by owning it.

The appearance of the packaging is immediately outdone by the aroma of the flower. An herbal earthiness and bright citrus is met with a ribbon of skunkiness for an enchanting perfume that finishes with a delicious dollop of Honeycrisp apple. Although nearly impossible to believe, A Golden State manages to continue sky-rocketing once you lay your eyes on the sticky, sweet cannabis fruit. Caramel Apple is stunningly purple, pistol’ed,  syruped, and sugared in sparkling trichomes.  Apple looks so wild and alive I felt guilty holding it captive.

After letting it roam free outside the jar in the fresh air for a while, Caramel Apple breaks up into a gorgeous crystalline trichome formation that looks like the inside of a geode. Throwing it in the grinder opens the bouquet even further and highlights the caramel apple scent to a mind-boggling extent. Remember those caramel apple suckers? This is that of flower. The inhale is simply gorgeous though not as on theme as the aroma-a weightless gas perfume floats in effortlessly. I would gladly purchase mints or toothpaste in the flavor of this smoke.

Caramel Apple’s high sits like a sparkling candy coating of well-being over the body. The effects decidedly lean towards enhancement, not impairment. With a glittery sensory expansion, this is ideal for social situations or looking hot in your dress and not losing your graces.  The body effects are intimate and sexy and the mind feels invigorated not inebriated. If you want to take a step back from alcohol this is an excellent alternative for a party or concert. 26% THC feels much stronger and fast-acting than the numbers would imply. Caramel Apple is quite simply that bitch of the top shelf.

Better than most at this price point. Spend the $60.