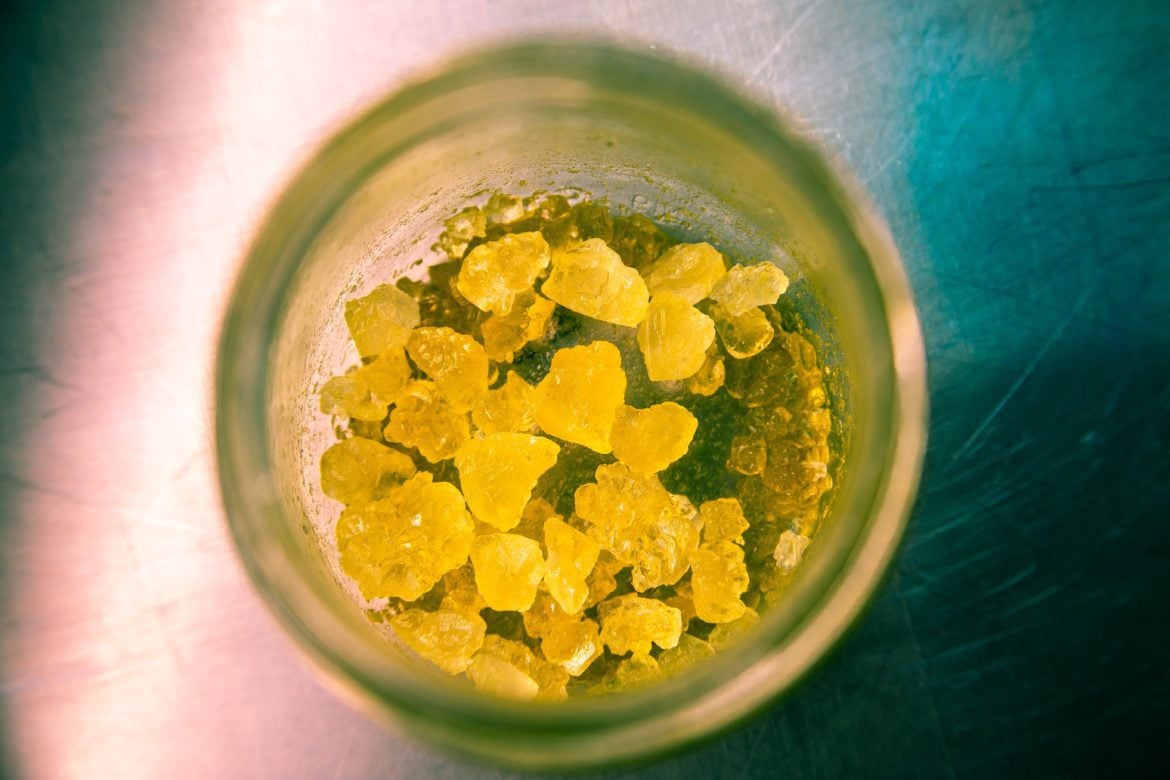 Most people smoke cannabis, while others vape it or take edibles to get the same effects. These methods all work just fine, but they’re a little limited when you really think about where the THC in marijuana comes from and the unlimited possibilities for absorbing those elements.

There’s another way to enjoy high-quality cannabis aside from smoking or vaping it regularly: dabbing.

But what is dabbing weed and how do you do it? Let’s break down dabs and dabbing: what it is, and whether or not it’s a good idea for beginners in this guide.

What is Dabbing Weed or “Dabs”?

Let’s get some definitions down before we go further.

“Dabbing” means that you consume weed in the form of “dabs.” Dabs, in turn, are basically concentrated cannabis doses that are made when you extract THC and other key cannabinoids using either carbon dioxide or butane (or any other appropriate solvent, really).

Once you extract those cannabinoids, you’re left with a sticky oil that serves as a potent cannabis product that, when heated up, can be ingested through with paper.

Cannabis dabs can also be called waxes, budders, butane hash oil or BHO, and shatters. Some dab concentrates can have flavors added to them or otherwise be altered to change the end experience. But most dabs are pure, offering enthusiasts a straight experience where they can truly see the quality and THC potency of a particular strain.

Although most people haven’t smoked dabs, it’s been around for decades, and since cannabis’s legalization in multiple states throughout the US, more and more weed lovers have been experimenting with different wax products and the ways you can use them.

Since dabs are so concentrated, you can arguably get a more intense high and/or a more euphoric experience without some of the occasional side effects you get from inhaling or otherwise ingesting plant products.

How Do You Make Dabs?

To make dabs, you have to first isolate THC and other cannabinoids from grinded flower. This is done by soaking the flower in a solvent, then heating the solvent to leave behind only a sticky and oily residue.

In fact, the process is pretty close to how you would make your own medicinal marijuana oil. People can make their own dab concentrate at home, but more and more dispensaries and delivery services are offering concentrated THC dab products these days. This is a good thing since making your own dab is time-consuming and can easily go wrong if you don’t know what you’re doing.

To smoke dabs, you typically need a “dab rig.” A dab rig is made of a few pieces, including:

It’s a bit more complex than smoking weed from a regular bong, which is part of the reason why it’s less popular than other methods. But there are some many reasons why you might consider smoking dabs in the future.

What Are the Benefits of Dabs?

As mentioned, dabs are basically concentrated THC wax. Inhaling vapor from it provides a number of benefits compared to inhaling traditional cannabis smoke:

Are There Side Effects from Dabs?

While dabbing weed can be fun and effective, there are a few potential side effects if you don’t have a lot of experience.

For instance, if you make an improper dab rig, you could easily accidentally injure yourself or cause a mess. This is especially true since you have to manually heat a metal or quartz nail with a small blowtorch or similar heating instrument. It’s easy to see how this could go wrong, especially for someone who might already be a little high.

Furthermore, if you don’t have a good dab concentrate to heat up and vape, then you could ingest other toxins by accident. This most often happens with first-time dabbers who make their concentrate incorrectly.

This is one of the reasons why it’s important to get your weed products from licensed and regulated dealers and delivery services like Emjay. If you have properly lab-tested, high-grade dabs, then you won’t likely run into any of these possible problems.

So, Should You Dab or Smoke?

Honestly? Smoking and dabbing weed can both be great experiences, and you should always do what seems best for your needs. We’d definitely recommend trying dabbing weed if you haven’t already so you can at least try the experience for yourself before coming to a conclusion.

But it’s important to do this only with a well-made rig and high-quality cannabis extract or concentrate. You don’t want to run into any of the above side effects, and it’s usually simpler for a beginner to make their own blunt or joint compared to crafting and successfully using a full-on dab rig.

For this reason, dabbing weed is best reserved as an activity for those who already have some experience smoking marijuana and want a novel experience, or who want to alter their consumption habits.

In the end, dabbing weed is unlikely to go away. In fact, it’s probably going to become more common over time as manufacturers create safe, easy-to-use dabbing rigs. Some of these commercial rigs even have electrical plugs that can heat up the rig’s nail, meaning you don’t have to manually heat it with a blowtorch or a similar tool. This makes the rig much safer to use.