It used to be cool when someone blew smoke rings off a joint. We’ve come a long way since then. Now that most of us are vaping our weed, we’ve opened up a whole new world of possibilities.

Vape clouds are much larger than puffs of smoke, opening the door to cooler little stunts that grab people’s attention. Plus, practicing your vape tricks before you show them off to your friends is the perfect excuse to have a little bit of alone time with your favorite strain.

Keep in mind that a large puff off a highly concentrated vape is going to get you extremely elevated in a very short period of time. Practice slowly to avoid spending the next few hours incapacitated. It also helps to practice them shielded from the wind and away from a fan. You could be performing the tricks correctly, but the evidence is rapidly whisked away. You wouldn’t know.

Better still, practice your tricks with nicotine-free vape juice. It’s less expensive than weed, and you can practice for longer without feeling the effects of THC or nicotine.

If you have a traditional vape, now would be the time to charge it up. Alternatively, you can practice with a CBD vape if you have one handy.

The French inhale is a classic. This smoke trick used to be showcased in cigarette ads back when people thought that smoking was sexy for some reason. It’s remained a part of pop culture. You should get bonus points if you french inhale while French Inhale by Snoop Dogg and Wiz Khalifa plays in the background. The music video is a great example of what a French inhale should look like when performed correctly. Who would have thought?

The biggest trick to this one is not to overthink it. It’s a lot easier than it looks. It’s really just gravity and breathing, two things you encounter every day if you have lungs and live on Earth.

If you perform a french inhale but allow the vapor to come up through your teeth, it will exit in little columns that look like a Bane mask. If you want to make the French inhale a little more interesting, try this variation.

This exhale is supposed to be reminiscent of a dragon but honestly looks like what happens when a cartoon character gets angry, that “awooooga” sound happens, and steam starts coming out of his face. It’s comical and entertaining. It also commands a lot of attention. See what happens if you pull this trick without announcing you’re about to do it. People will be simultaneously confused and fascinated.

A dragon exhale requires you to waste a large pull of weed, so keep that in mind before you go for it. This one is better if you’re using up a cart you like the least. It wouldn’t be nearly as cool to squander beautiful live resin. Stick to the cheap stuff.

To dragon exhale, take a huge puff from the vape but don’t inhale it. Let the vapor sit in your mouth. Press the center of your lips together hard, but leave both corners of your mouth open. It’s tricky to get this part right.

It’s kind of like a forced smile with a mostly closed mouth. If you imagine yourself saying “Thanks, Grandma, for the beautiful gift of this sweater with pictures of your dogs on it,” you’ll understand the right way to position your mouth.

Exhale forcefully through your mouth and your nose at the same time. You’ll create four huge jets of vapor that each come out in different directions. You’ll look like you’re about to breathe fire. 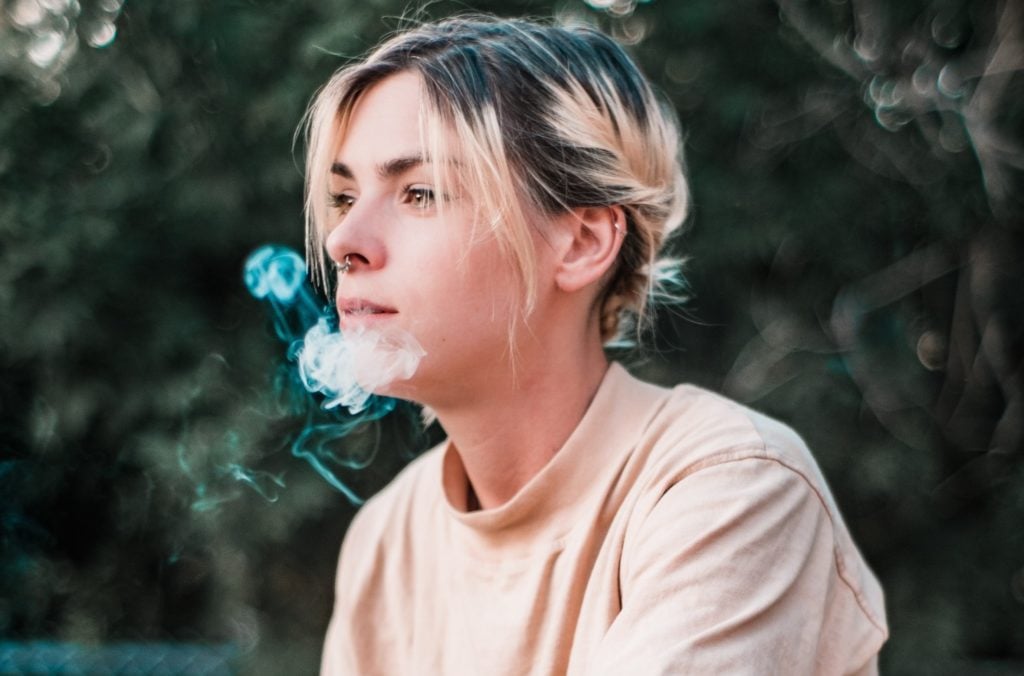 A ghost hit is a trick that looks like someone hit rewind on you after you attempted to exhale your vape. You let the cloud go for just a second and then bring it back in. It’s like vaping in reverse, and it can be trippy if your observers weren’t expecting it.

This is a trick you should try in front of your friend that gets all existential and theoretical when they’re high. You know, the one who always asks how you can really be sure that you aren’t living in a simulation.

For a ghost hit, draw a big hit from your vape. Hold it in your mouth for a few seconds to assure the vapor gets nice and dense. Then, slowly exhale it without much force. The key is to keep it in a large, dense cloud right in front of your mouth. Once you have a huge cloud in front of you, inhale very deeply and very quickly to draw the hit back in.

Most complex vape tricks actually begin with the ghost hit, but transform it into something else. It’s a good starter if you’re going to put on a whole vape performance act, but it’s perfectly fine to do on its own if you’re not that committed and just want to look cool for a second.

Smoke rings from a cigarette are pleasing to the eye, but generally very small. Vape clouds are huge, allowing you to create a ring that’s much more impressive in size. If you know how to blow a smoke ring, a vape ring is the same thing but bigger. If you’re new here, it’s not too difficult to learn.

Start by taking a normal inhale from your vape and holding it at the back of your throat. Push your tongue back into your throat and keep it there. Push your lips against your teeth and form an “O”. Don’t do a kissy face or a fish face. Your lips need to be tight against your face.

Now it’s time to make your smoke rings. Don’t exhale the smoke like you’re breathing out. Instead, pretend to have a series of tiny coughs. These small forced puffs out will ultimately form the vape ring, rather than a cylindrical tunnel of vapor. The little breaks in between cause the rings to break apart into a trail.

You can finish your vape ring by keeping it close to your mouth, tilting your head down, and inhaling it from the top. For a moment, it will look like a bull ring or a septum piercing. It’s a good ending move that’s a little more interesting than your typical ring.

Let’s add some geometry to the mix. After you blow your smoke ring, give it a gentle bop with your hand. Do the same thing a cat does when it’s curious about something. A tiny little swat to the side of the circle will reconfigure it into the shape of a triangle, albeit an imperfect one. People have seen smoke rings before, but smoke triangles are an innovative crowd pleaser. 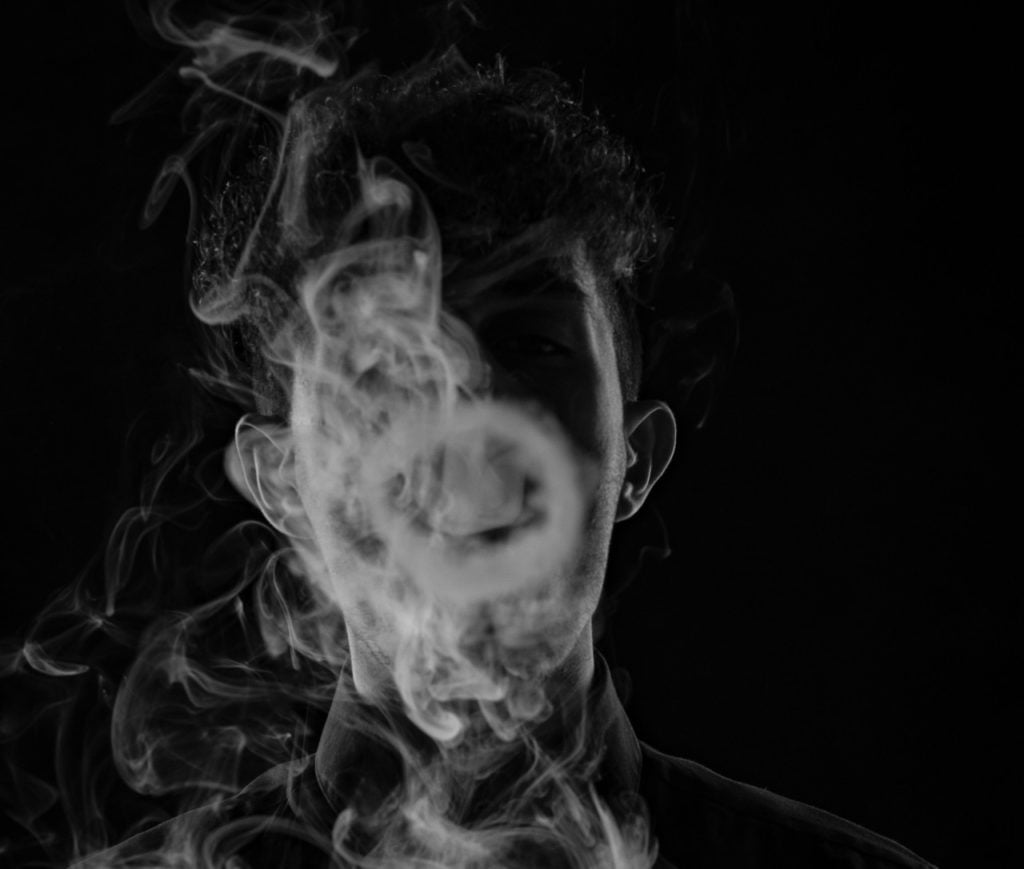 Once you have your vape rings down and you feel like you’re good at controlling the size of the rings, you can start to stack them. Releasing a large ring and working your way down into slightly smaller rings can create a series of progressively small circles, kind of like Russian nesting dolls but made of vapor.

This requires a lot more finesse than your average vape ring trick, and it might take you a long time to be able to get your timing and sizing perfect. You have to be patient. Once you master the trick, it’s highly impressive. Anyone can blow a ring. It takes someone with a lot of skill to perfectly stack those rings.

Vape tricks are fun. You can use them to amuse yourself or amuse your friends at your next smoke session. Be prepared to practice, and don’t waste your most expensive weed while you’re still learning. A vegetable glycerin nicotine-free vape juice will help you learn without getting too high to perfect your technique or drain your wallet.

When you get really good at it, start doing tricks when you exhale your dabs. That’s something nobody will expect.

When you’re ready to bring your best tricks to your friends, Emjay is here. We can deliver you vape carts that will get you high and entertain you at the same time.