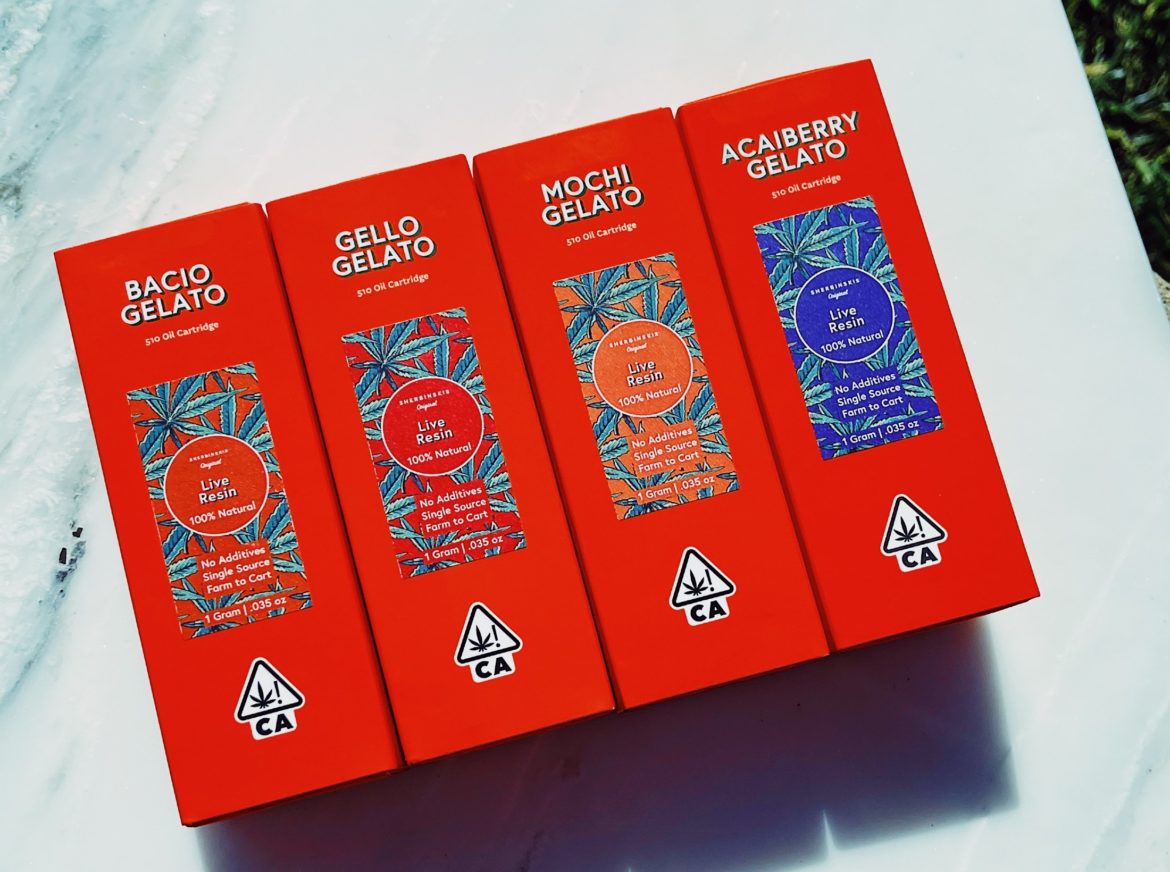 Way better than the competitors at this price point. $46 is a steal for the gram of Gello Gelato Live Resin.

Dreamy, blissful uplift adds a clear-headed shade of joy to your experience.

You can purchase the Gello Gelato Live Resin cartridge alongside the rest of Sherbinskis lineup on Emjay.

If you’re unfamiliar with Sherbinskis, it is absolutely required reading on our LA cannabis syllabus.

Founded in 2019 by legendary Bay Area grower Mario Guzman, Sherbinskis offers only indoor-grown flower and has produced some of the most beloved strains in the game. Name-checked consistently by Hip-Hop artists Sherbinskis established themselves as a reliable tastemaker by originating both the Gelato and Sunset Sherbert strains.

The popularity and cult following of either strain is enough to land them in the Hall of Fame. But originating both is truly something special. Once you understand that Gelato literally changed the game, then you can appreciate more fully how exciting it is to add Gello Gelato to the canon. A new Care Bear cousin just rolled into town and you know you’re about to hit it off swimmingly. Gello Gelato arises dramatically like Captain Planet out of the powers combined of the superb Bacio Gelato and the Girl Scout Cookies descendant Mochi Gelato.

Craft brewers offer flights of their core pours to highlight the strength and diversity of their practices. If you want to know what this coast really has to offer in cannabis book yourself a flight of Gelato, Sunset Sherbert, Bacio Gelato, and the Gello featured here to fully understand the range of Sherbinskis’ strengths.

Live resin is all the buzz these days as cannaseiur’s tastes evolve further and further towards more reliable and wholly natural terpene and cannabinoid retention. Live resin avoids drying and curing the flower in an effort to preserve flavinoids and terps as fully as possible in the extraction process. Under the vast penumbra of Butane Hash Oil [link], live resin 510 cartridges such as this aim to produce the dabbing effect without the dabbing equipment.

Whether you’re looking for a more concentrated buzz, hoping to avoid a lingering odor, too worn out to exert the effort of rolling a joint, or about to step into a movie, vape pens are convenient and compact in a way flower, grinder, piece, and fire cannot be. If you are new to cannabis or simply inexperienced in the wide rainbow of California’s offerings, it can be very easy to think all vapes smoke the same. And in fairness, the robust midsection of the bell curve in this space does present themselves so indistinguishably that there isn’t much difference to even the most discerning of palates. However, as technology and cultivation practices become more refined a small handful of trailblazers are able to distinguish themselves from the pack.

Outstanding vape cartridges emerge when innovation meets strong fundamentals. Whether crafting a more advanced vaporizing technology such as the Pax Era Battery or PuffCo’s portable vapes or committing more fully to the basics of preserving the plant’s innate treasures like Kurvana and Raw Garden [links], vapes really aren’t all that special unless you put a lot of work in. Luckily, when they hit the mark they smack for a truly revolutionary experience.

Sherbinskis swings for the fences by monitoring the precise terpene profile of each strain.  Gello Gelato jiggles with 37% each of b-Caryophyllene (aromatic wizard found in black pepper, clove, and rosemary known for anti-anxiety and depressive effects) and S-Limonene (exactly as it sounds with lemon/grapefruit/lime citrus aromatics and shown mood elevation) with assists from 19% cis-Nerolidol (found in jasmine and ginger for sedation and calm) and 16% Linalool (found in cinnamon and lavender for relaxation).

Sherbinskis has already struck lightning twice—can they go for the hat trick with a spectacular, spot-on cartridge? Let’s go to the vape! 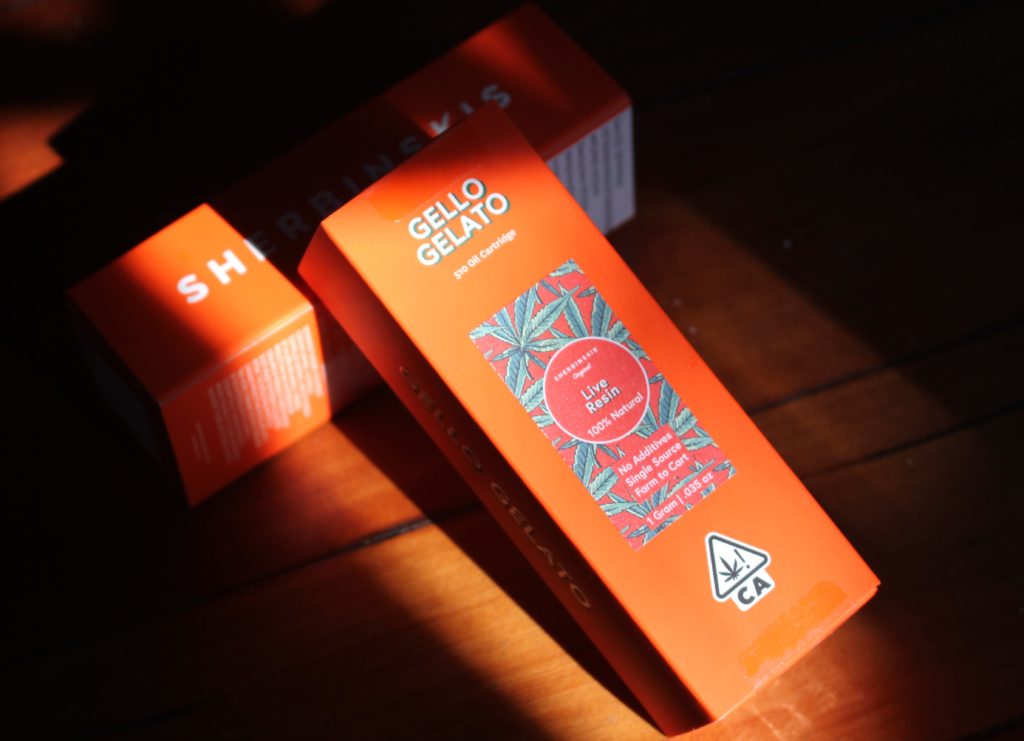 Sherbinskis’ signature burst of unapologetic bright orange wraps the Gello Gelato in a chromatically scintillating package with their characteristic weed leaf pattern as the bow on top. I don’t know why or how such simplicity can be so mesmerizing but somehow it is.  Perhaps due to Elle Woods deriding its potential to be “the new pink” or the fact that no word in the English language rhymes with it, orange is severely underused and its appearance here makes it pop off shelves.

The box promises farm-to-cart single source live resin with no additives and this is the level of transparency that all cannabis products should have. Gello packs 88.76% THC  and recommends a 2-3 second draw as a single serving. Inside the box, the cart is held in an airtight plastic tube—an awesome touch to preserve freshness. I was genuinely surprised how much authentic weediness comes through on the nose and it seems the efforts to preserve the smell absolutely worked.

Sherbinskis’ carts take on a notably different shape than any 510 cart I’ve seen on the market. With a more portly stature and a one-of-a-kind mouthpiece that doesn’t taper into the traditional mouthpiece or extend flush with the rest of the base, Sherbinskis manages to make the 510 sexy (which is honestly something I never thought I would say). A small understated S near the cart’s threaded base seals the deal on idiosyncrasy that is truly super. Screwed into the equally orange Sherbinskis battery, somehow Gello Gelato manages to make a full mood out of technology that is normally bone dry on aesthetic.

On the inhale Gello tastes more like flower than vape. Gello Gelato is surprisingly smooth. The live resin feels clean and of the earth—a far cry from the science project headache of cheaper vapes. Maybe it’s something about how the mouthpiece streamlines the vapor but the temperature of the inhale feels exemplary for a 510 as well.

Gelato’s Gello is exceedingly dreamy. A beautiful visual experience and a light reverence in the spirit add a lovely rose-tinting to your perspective. Honor the cannabis experience and reach for Gello when you’ve got something you’re excited about. Whether it’s game night or just a movie you’re excited to see let Gello do its magic in your waking hours and not just for bedtime—she’s worth staying up for.

High caliber live resin and a fantastic evolution of the 510 vape, the Gello Gelato cartridge from Sherbinskis fully earns its $46 price point.