Bloom uses propriety technology to preserve the unique fingerprint of each strain in their one hundred hit disposable wonders.

Well priced at $25 for .35grams, Bloom vapes use an all-in-one solvent-free distillate.

Skywalker releases the body into bedtime with a delicious earthy inhale that melts the day away.

You can find Bloom's Skywalker vape in single-use on Emjay, for free delivery or in-store. Bloom offers tons of variety, so make sure to peruse all of its products.

Started in 2014 by 5 friends in Los Angeles, Bloom Brands is poised to expand its market presence into the South and across the Canadian border after fantastic success in a variety of markets across The States.  Bloom offers pre-rolls and vapes to the Great American Southwest (California, Arizona, New Mexico, and Nevada) and all the way out to Washington and Oklahoma.
Bloom makes its name on consistency and innovation.  This iteration of the Bloom One is the 5th evolution of its disposable vape technology. Bloom boldly proclaims “terpenes are religion” and they put in the work to honor the magic of this divinity. Bloom sticks to the classics for its disposables: Pineapple Express, Jack Herer, Grand Daddy Purple, and King Louis XIII (I wrote a review for this Bloom strain, read it here).
The Bloom disposable touts itself as “the One Hundred Hit Wonder” with the promise of reliable, extended use. The all-in-one includes 350 milligrams of oil and the battery needed to turn it into delicious vapor. Bloom’s packaging is simple, clean, and elegant. Nothing about it screams cannabis, making it a supreme choice for the most discreet users. Move over Wine Moms; it’s time for Cannabis Caregivers.

Bloom uses a proprietary process to identify the fingerprint of each cannabis strain. That unique identifying pattern is then used to recreate that exact sequence in the oil. This is the next generation of true-to-strain technology. Sometimes it’s hard to feel certain about what actually makes it in your single-use pen. Bloom does the work of clearing up that mystery for you. 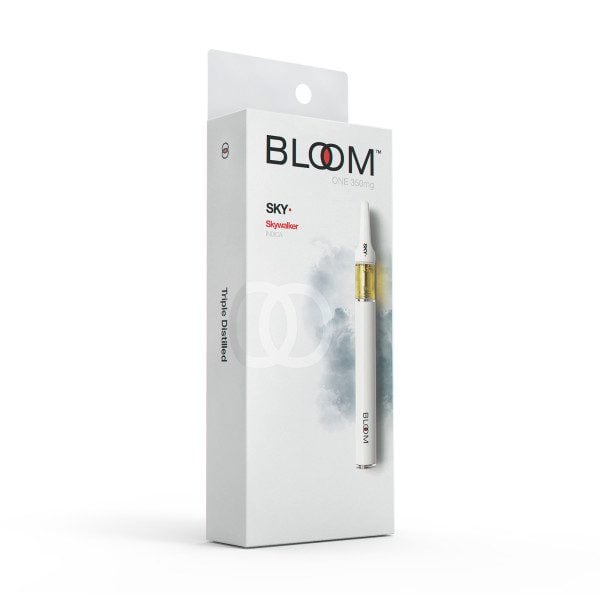 Skywalker is Mazar x Blueberry and one of the best-selling strains nationwide. Credited to Amsterdam’s Dutch Passion Seeds, Skywalker was originally bred to combine the joys of Blueberry with the hearty growing stamina of the Mazar lineage plant. Skywalker was one of the seminal strains in California’s medical cannabis market and it is v on brand for Bloom to go with the classics over newfangled innovations.

Preserving Skywalker’s unique genetic fingerprint in a disposable vape is an awesome service to our newest jokers, smokers, and midnight tokers. If you are new to the game and don’t want to deal with the aroma or accouterment of smoking flower, this is a great option for a proper introduction. Skywalker is beloved for its bedtime, relaxation, and pain-relieving prowess.

Bloom’s disposable is a great alternative for those headed in the opposite direction of the most prominent LA cannabis trends. This is for folks who don’t want to rock branded hoodies and aren’t waiting outside of midnight showings for vintage B-movie stoner classics. Bloom is great for smokers of a different era who are in a new stage of life and have left rolling doobies in the past.

Bloom’s Skywalker floats on sky-high stats: 87.925% THC, .18% CBD for 318.838mg total cannabinoids—a 91.09% potency. The measures Bloom takes to preserve the flavor profile of the plant absolutely pay off.  The vapor tastes surprisingly weedy with a really pleasant earthy character. Skywalker rips really well for a disposable. I accidentally hit it too hard on the first inhale and was much more affected after a small coughing fit than I expected. An instant connection with the body arose naturally and the onset was really rapid.

The Bloom Skywalker pen is what people love about vaping—it’s a rapid and potent high with almost no effort necessary. You won’t do too much sky (or earth) walking on this one. When it sets in, it’s time to relax or lie down. Skywalker provides an unapologetic body high that never takes its foot off the brakes. This is not a smoke to get things done, so save it for after work and the end of your responsibilities.

Disposable vapes almost never hit the body this keenly for me so props to Bloom for delivering on their promised true-to-flower experience. I found this pen to be more mood-revealing than enhancing so it’s a great match for introspective self-care moments. You’ll want Skywalker for your next extravagant bubble bath or extended snuggle sesh.

If you are newer to cannabis or a more infrequent user the strength of this pen will last you quite a while. This is also a great match for enjoying the peak of modern convenience. For my dollar, I’d shell out extra for the more evolved Kurvana half-gram [link]

$25 is honestly a good price for a high-quality Bloom disposable, but it is a little pricey for .35 grams. If you don’t smoke often, it’s worth it. If you’re a regular smoker, then it’ll go fast.