Dan’s Cola is Sherbinskis’ house brand, the cannabis equivalent of the grocery store’s generic line. Or, all of Trader Joe’s. The business strategy here is to save money for the consumer by avoiding the marketing costs without a significant loss of quality of the goods. If you love TJ’s then this review is for you.

Dan’s Cola keeps their packaging simple and homey. A dark green background reads “taste & feels” and features (presumably) Dan hugging (or…harvesting) his cannabis. The label is really simple and clean and the rectangular pouch construction of the half-ounce bag is really inviting. Dan’s Cola comes in a handful of other beloved strains: Chem Dog, Cherry AK, Prime Red, and Sour Diesel. Dan brings us his smalls (which, if you don’t know, are the baby buds of the harvest).

Dan’s Cola is priced to sell. $18/eighth or $70 for the half-ounce here. This is as affordable as Cali’s cannabis game gets. Compared to alcohol, this will likely last you much longer than you can stretch the same amount in booze. This is good-to-have-around weed. Keep it on your coffee table to share with roommates or hoard the stash for emergency use. Dan is great to take camping and share with the group or throw in your backpack for a long weekend.

Someone said it’s nearly impossible to really see Los Angeles for what it is. All of the layers, levels, decades, and depictions that mix, match, and sit directly on top of eachother like the layers of smog over The City of Lost Angels obscure the reality beyond perceptible recognition.

In my understanding, The Devil and God made a bet, both saying they could do the other’s job better. The Devil said he could make a paradise better than God’s; God knew she could craft a punishing hell better than Satan. They went to their respective corners and when they reconvened, both returned with Los Angeles.

LA is Satan’s idea of Heaven and God’s conception of torture. Somewhere in the overlapping Venn Diagram of these oxymoronic paradigms is the gridlocked, carcinogenic, overly hyped, overwhelmingly unhoused, and racially divided best and worst place on Earth.

Within this contradictory, vastly ranging milieu it is truly a triumph to find something (or someone) real. It’s easy to say LA is fake or shallow or flakey. And maybe it is. Maybe we are. But it’s an amazing place to dream, an awesome place to be queer, and a leader in progressive politics including a very exciting Universal Basic Income pilot program. And, you know, of course, there’s the bustling cannabis market.

Dan’s Cola takes a big step back from the indecipherable chaos of El Lay. Their packaging looks like you stumbled on merch from a weird midwest chain you only encounter when you go out of state to visit your bestie. It gives you some room to breathe around this bizarre and fantastic Southern California fishbowl. And to remove yourself from the hype around LA’s cannabis scene. 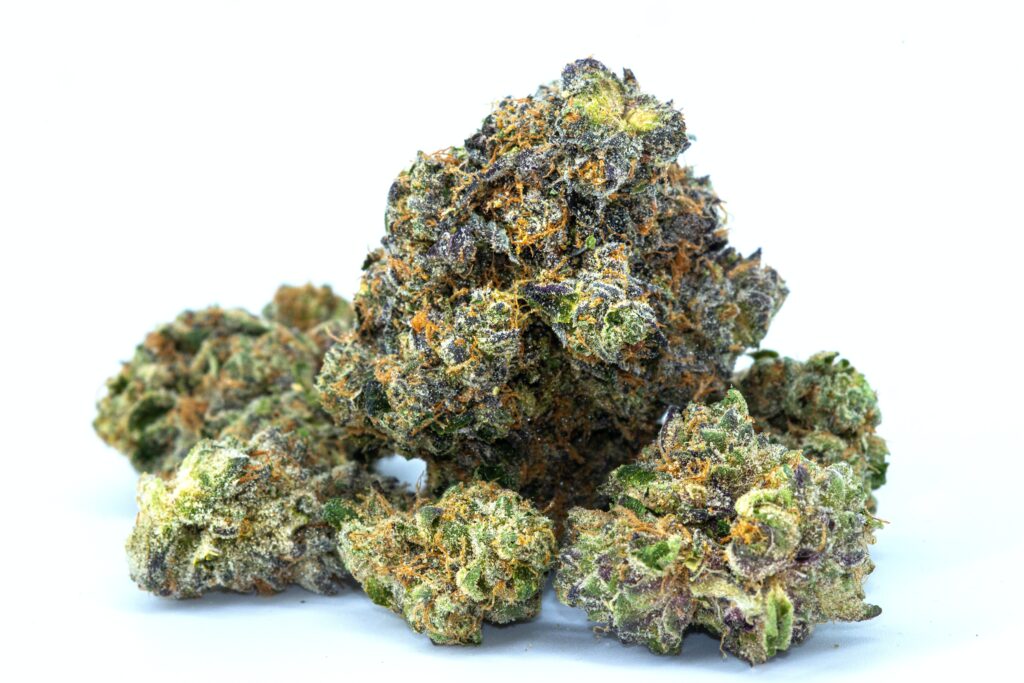 Dan’s Cola half-ounce bag is like your comfiest jeans- not much to look at but it feels great. The sides of the bag highlight “taste and feels”.

When you open the bag to smell Dan’s flower you understand why he didn’t include “smells” on the front. The aroma is not good. Some of the usual suspects of cannabis scents make an appearance but they are quickly sucked into an overwhelming quicksand of plastic reminiscent of cheap toys. If you think it’s wild that someone would consider the smell of their flower in purchasing cannabis, keep reading because this may be the choice for you.

The smalls live up to their promised stature. They can definitely flex on their little cousin Shake but they will get whooped by the Big Buds. The flower seems dried out and underloved. If thinking this deeply into your cannabis purchasing seems ridiculous, keep reading because this may be the choice for you.

Cereal Milk isn’t the strongest but it definitely does the trick. You can use this one in blunts and bongs to smoke higher quantities and not fall into an absolute stupor. Dan sends you off into your own little world. No one grabs cola for the party-Dan’s is not very social or expansive. It focuses on the mind but in a very narrow way. If you’re in a situation where you just need to zoom in and knock out a repetitive task this is a good smoke for that. There is a light rest in the body but the head-high steers the ship.

$70 is quite the bargain for half an ounce. That breaks down to about $17.5/eighth. If you don’t want to spend too much I’d go for a lesser quantity of a higher quality and get a Glass House Farms eighth for $25 instead.