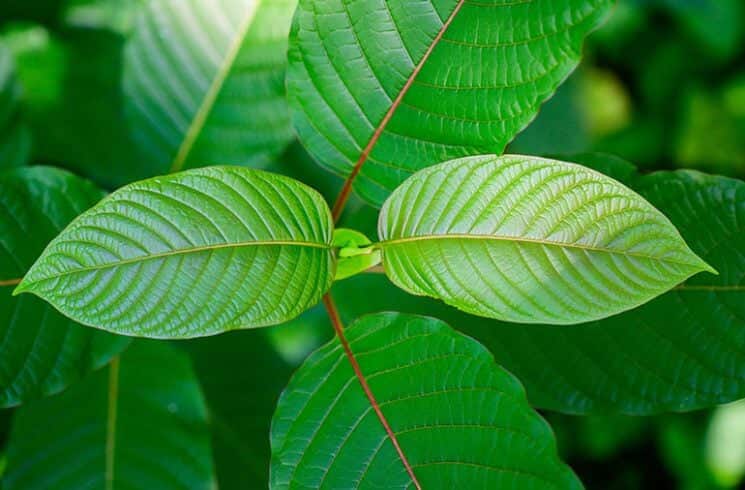 Kratom is an herbal extract that comes from the leaves of a tropical evergreen tree in the coffee family. Since the 1800s, these leaves have been used in several indigenous medicine traditions and more recently have appeared in The States as a recreational drug.

These leaves can be ingested in a variety of ways. For example, fresh kratom can be chewed right off the tree. And when dried properly can be chewed and swallowed. Kratom leaves can also be made into a drinkable liquid or crushed into a powder that you can spoon directly into your mouth or swallow in capsule form. In traditional uses though, kratom is also often made into a tea.

Given the latin name of mitragyna speciosa, kratom is often derived from sources in Malaysia, Mynamar, Thailand, and other parts of Southeast Asia. In commercialized U.S. applications, users will find kratom in many forms on smoke & head shop shelves including capsules, tinctures, gummies, and drinks.

In 2019, the FDA ruled that its current  manifestation and usage in the U.S. has no known medical value. Recreational users report seemingly opposite effects-both opioid like sedation and stimulant like alertness. The size of the dose is what makes the difference in how it makes you feel.

Doses on smoke shop shelves in The U.S. normally range between 2 and 6 grams.. 1 or 2 grams is suggested for beginners. 2 to 4 grams will yield energetic effects. 4 to 6 will be the range in which opioid effects begin to kick in. Any dosage higher than 8 grams is not recommended. Once you go past an 8 gram dosage there seem to be much more extreme side effects including anorexia, agitation, and erectile dysfunction in people with penises.

In regions where it grows naturally, kratom is known for its energetic effects in low doses.  Folks performing hard labor in these areas are also known to chew on raw kratom leaves to fuel their energy and overcome the monotony of their jobs.  Similarly, recreational users in the U.S. will also reach for kratom when they want a stimulant effect.

As the workers in Southeast Asia figured out, kratom is actually very similar to the coca plant-the constituent basis for cocaine. If you use kratom in low doses (1 or 2 grams from the smoke shop) you’ll feel a similar effect-it will wake you up, get you wired, stimulate your sexual desire, as well the urge to tell everyone about your screenplay. Users grabbing their kratom off U.S. shelves often report feeling alert, talkative and happy at low to moderate doses.

At higher doses, kratom swings in the opposite direction and offers effects more similar to opioids. This means low levels of energy and sedated motivation and activity. The effects are so similar to opioid drugs that, in Thailand and Malaysia, some young folks have taken to mixing kratom with cough syrup and cola to mimic “lean” in The United States.

As previously stated, smoke shop kratom will often land between 2 and 6 grams and 4 to 6 will be the range in which opioid effects begin to kick in. Again, taking more than 8 grams is not recommended and may increase risk of unwanted side effects. Because higher doses of kratom act on opioid receptors they may also be used to “break the habit” of traditional painkiller dependency. Obviously, consult a doctor before using kratom for this purpose.

Although some actions have been taken by the DEA to include kratom within current the Controlled Substance Act, scheduling those actions have been unsuccessful. In traditional medicine practices, healers have used kratom for musculoskeletal pain (that’s the high dose painkiller effect!) and as part of extractions that are applied as local anesthesia and dressing wounds.

At time of writing, the U.S. based Mayo Clinic warns against the usage of kratom as acute dosing can have alarming side effects and in their eyes there is no known medical application. Whatever feels most true or like “the right choice” for you is solely your choice and your choice alone. But if you’re going to experiment, remember the always goodadage: “start low and go slow”. Try low doses first to see how they feel and check in with yourself before adding more. And don’t forget to account for the delay on how long it takes for things to kick in!

Is kratom better than weed?

That’s a no for me, dawg. Not all of us here at Emjay have tried it but it really, really probably is not as good as weed. So maybe just stick to your usual and let us do the driving?