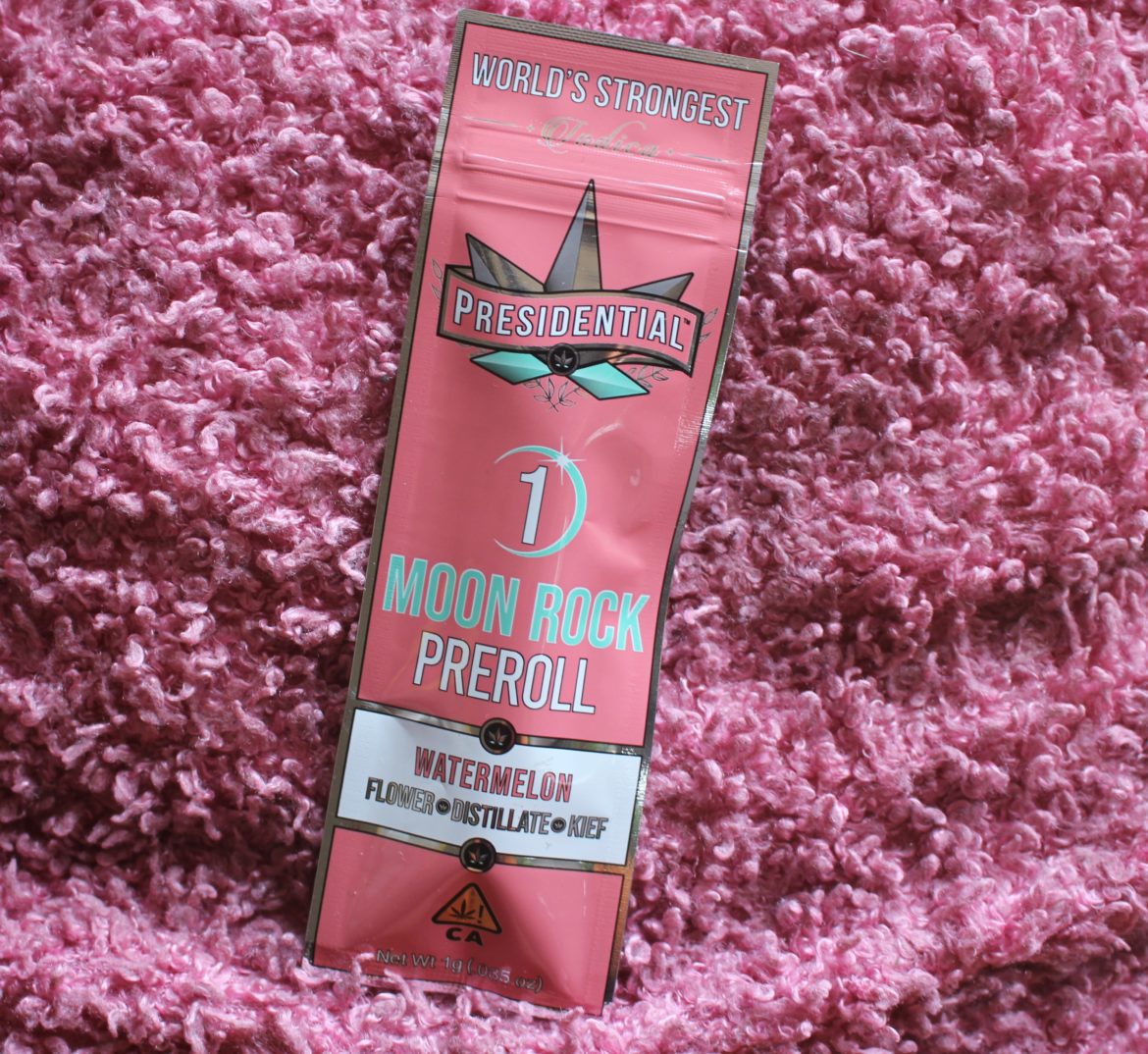 Presidential makes their name in the cannabis industry on the ingenuity of their infused flower “Moonrock”. Introduced to the market in 2012, Presidential heralds themselves as one of the founders of the ubiquitous infusion trend we see today.  Whereas most growers keep their flower and distillate separate until the pre-roll is constructed, Presidential uses a proprietary process to infuse their organic estate-grown cannabis itself. Distillate permeates the flower all the way to its core from the tip of the bud to the stem and Presidential double downs on super-strength with a generous dusting of dry-sifted trichomes on top. These moon rocks come solo dolo in eighths and grams and have also been made in collaboration with the precise geneticists at THC Design. After deftly turning their mild-mannered flower into an emerald Hulk, Presidential then brings their mad scientist to you in the most convenient formats possible: tobacco-free hemp coned 1.5 gram blunts and chlorine-free hemp paper 1 gram joints. These hard-hitting pre-rolls come in a wide rainbow of confectionary flavors-grape, peach-mango, pineapple, strawberry, the watermelon featured here, and the forever that bitch of candy-blue raspberry.

Presidential deems theirs “The World’s Strongest Pre-Rolls” and that isn’t far from the feedback we’ve received here at Emjay. A customer recently exclaimed their enthusiasm for Presidentials by sharing that although they normally smoke an entire infused Jeeter [link] without pause, the Presidentials were strong enough to knock them out within 1 or 2 hits.  As a delivery driver for Emjay, I’ve had people (attempt) to text me a thank you for dropping off their Presidentials but within the minutes since I’ve left they’ve gotten too high to use their phone properly.

Presidential centers the promise of super strength in their marketing. The concept of being really, really high is a spectacularly interesting one and (unfortunately) nearly unchartered territory within the purview of what we consider serious, academic inquiry. Unfortunately, cishet, white, upper-middle-class, able-bodied men make up nearly the entirety of the philosophical canon taught in this country’s schools.

This severely limits the scope of the aspects, portions, and perspectives on lived experiences that are dug into with the strength and longitudinal attention these white men are privileged to devote their lives to. In other words, the philosophical meditations offered in most instances (those you don’t have to go digging under the rubble of colonization to unearth) are coming from people who have never gestated or given birth to human life, who have never learned to adapt to the loss or lifelong absence of sight or vision, who are not of a gender unassigned to them at birth, who have never healed from ancestral trauma, don’t know the playbook for dodging the seemingly endless faces of racism,  and who do not represent indigenous wisdom in commune with the rhythms and natural fruits of our living earth as the one true god (amongst a litany of other ever-increasing and constantly-evolving complexities that color the nuances of our experience in the digital age). Philosophy as taught in mainstream education only speaks to a minuscule pinprick of the unspeakably vast and ceaselessly shifting moment-to-moment experience of whatever this life thing is. Also excluded from this repressive, Puritanical, infinitesimally small grain of sand perspective are the use of cannabis and other psychedelic drugs.

To speak more briefly-the philosophy and “hard science” that found our society and formal education leave out a crushingly predominant majority of the expansive and divergent human experience. Including how the human responds to drugs. Drugs have always existed in one form or another in cultures across the globe. And were/are granted the proper respect and inquiry in several of them. However, within the context of our colonized white supremacist able-bodied, and heteropatriarchal culture, we are not given that insight without putting in a lot of effort. State representative Alexandria Ocasio-Cortez recently introduced legislation to remove the ban on psychedelics to allow for more scientific research into their many and varied therapeutic uses. Excitingly, California is also slowly moving towards decriminalizing psychedelics for further study and therapeutic use. As we painstakingly await our institutions’ ability to move a few decades closer to present-day reality, our understanding of drug use is left primarily to the (also disproportionately cishet, male upper-middle-class, able-bodied white) folks making our favorite films and television.

What does it mean to be really high? Try to provide a narrative about it without calling on something you’ve seen in a movie or episode of television. Attempt to talk about it with friends without referencing Fear & Loathing or How High. Reach for a conceptualization that isn’t based in the sparkling, spectacularly heart-centered accuracy of euphoria.

Language falls tragically short in describing the myriad of our lived complexities. We must do our best to get to work on building a relationship with our actual moment-to-moment feeling sensation. No one knows what your life is really like but you. And you owe yourself intimacy with that spectacular exclusivity. Let’s get in touch more deeply with ourselves and our time here on this planet through the lens of cannabis.

What does being really high mean within the context of Presidential’s ostensibly “world’s strongest”? Let’s find out. 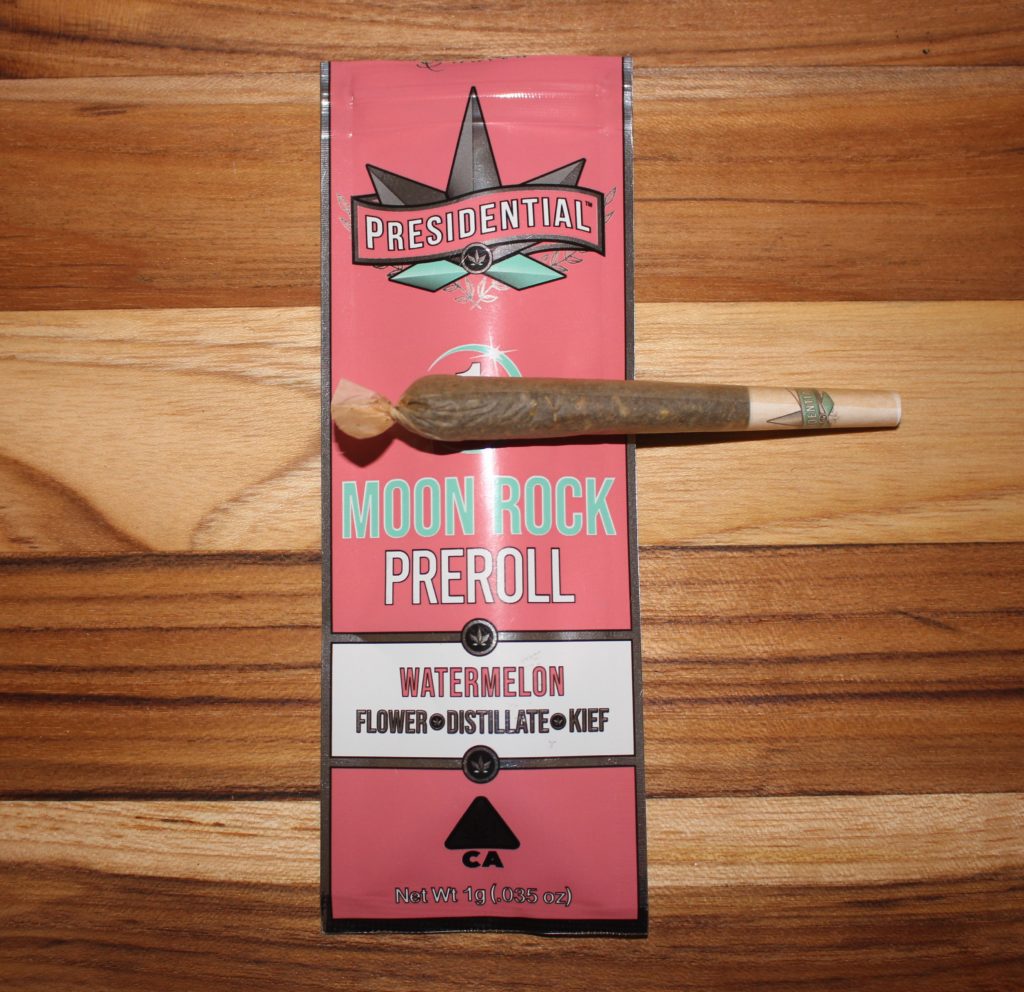 Digging into the pouch, the watermelon smell definitely presides over the aromatic experience but some of the earthiness of the flower does make it through. An unassuming, cone-shaped jay adorned by a Presidential branded filter greets you in the bag. It doesn’t look like much but keeps in mind this is definitely a “size of the fight in the dog” type situation.

The inhale and exhale taste like a pink starburst with most of the weed flavor lost in the candy coating. No cap, effects set in after the first inhale or two.  Moon rock makes you feel that all is well and the sensory experience becomes a lot more magical. This is the type of high that melts you into an inert but affable red-eyed fool-what many of our foremost doctors and scientists might refer to as “stoney baloney”.

The high is trippy and fun and with verifiable certainty is the type of buzz that fueled the invention of lava lamps and blacklight posters.  This is a great pairing for trippy, carefree cinema (try The Spongebob Squarepants Movie or Speed Racer) and rich, vibrant musical artistry (Brittany Howard, Nina Simone).

Although this is the jay, not the blunt I would appreciate a more resilient mouthpiece to better facilitate hitting once or twice and coming back to it later.  More of the weed flavor comes out further down the smoke. The effects are really strong but not overwhelming if you pace yourself.

Presidential’s Watermelon Moon Rock Infused Preroll is jaw-droppingly underpriced for its strength. I really don’t think you can get higher for $15 bucks.