What is THC Budder? 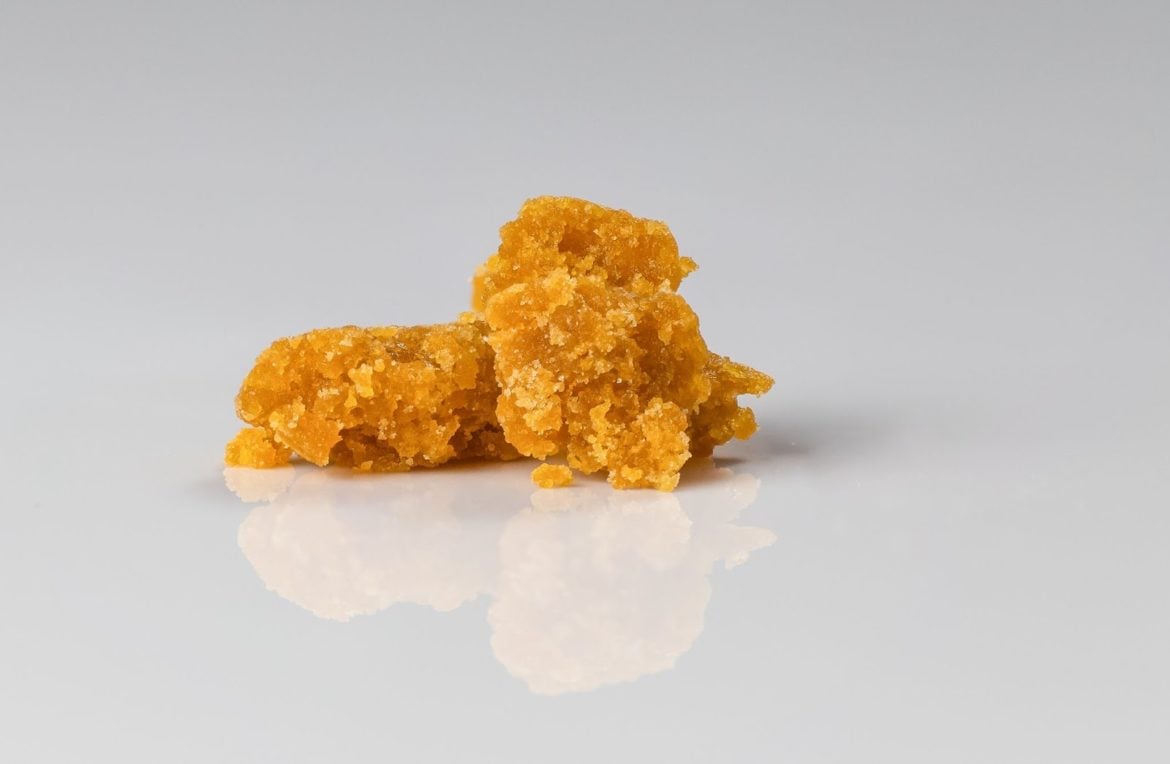 Budder is an innovation on traditional hash, which is just the resin from the exterior of the plant. Budder is a resinous extract that contains everything but the green part of the plant.

Concentrating the extracts of the bud while removing the plant material makes every hit more potent. You’re only smoking or vaping the active parts of the plant.

Concentrates like budder pack a much stronger punch than flower-based products, and that’s the appeal. If you’re looking for a high-powered cannabis experience without the burnt or herby flavor, you’re going to find it in budder.

Are budder and cannabutter the same thing?

A lot of people get tripped up here, especially because cannabis lingo isn’t always easy for the uninitiated person to navigate.

Budder is an extract of the plant, but cannabutter is an ingredient used to make edibles. Cannabutter is actual butter or a vegan butter alternative that’s used the same way regular butter would be used in a recipe.

You can’t smoke cannabutter, and you can’t cook with budder.

How budder and other extracts are made

There are many ways to make weed extracts, but most often, these products are made with solvents. Solvent-based extracts are made in a special extractor with several chambers. The chambers introduce whole cannabis flowers to a solvent like butane. The butane sucks up all the cannabinoids, terpenes, and phytonutrients from the plant. The plant material is separated from the mix, and the butane is removed from the extract.

The end result is an oil that is composed entirely of the plant’s contents. This oil can be processed to change the consistency. It’s used to make THC budder, honeycomb, shatter, wax, and crumble. The difference in consistency is a result of the method used to process the concentrate.

The names of the concentrates are fairly self-explanatory. Wax looks like wax, crumble is crumbly, shatter shatters, and honeycomb wax is supposed to look more like a honeycomb. In reality, it kind of looks more like a sea sponge or peanut brittle that someone picked the peanuts out of.

Budder looks like butter. A little more like peanut butter than dairy butter in terms of consistency and color, but it’s a texture that most people would definitely agree is buttery.

The different methods of cannabis extraction

If you’re a discerning consumer, you probably want to know how your budder is made. When you get whole flower, it’s a little easier to determine what you’re ingesting. Your budder has been processed and is sometimes exposed to solvents, and some people may not be comfortable with that.

The goal of a perfect solvent extraction process is to leave no detectable amounts of solvent behind. Reputable manufacturers test the end process for residual solvents and produce third-party lab reports. If you can’t find these reports or if you don’t like the results, you may be hesitant to use that particular extract.

Although budder is typically made with butane as the solvent of choice, there are other methods. Some growers use food-grade ethanol to make their extracts. While food-grade ethanol is still volatile, it’s generally viewed as safer than butane. Butane doesn’t have any place in the human diet, either ingested or smoked. Food-grade ethanol is what’s used to make things like premium vanilla extract. It’s still alcohol, but it’s not as damaging as butane.

The old-fashioned way of making extracts involves ice water. Ice water hash, or bubble hash, uses frozen cannabis. The trichomes and resin freeze and snap off the flower. The plant material is then whisked away through a series of mesh filters until all that’s left is the extract.

The companies that go through the trouble of creating solventless extracts are usually quick to point that out. If the idea of solvents gives you the heebie-jeebies, go for a solventless budder.

Can I make budder at home?

There are cannabis extracts you can safely make at home. Technically, budder is one of them. If you’re wondering if you can produce it the same way that most growers produce it, that’s a hard “nope.”

Butane extraction is dangerous, even with the proper equipment. It takes one little spark, even from static electricity, to start a giant fire. Explosions happen at butane hash oil labs, and those people are professionals who are perfectly equipped with everything they need. People’s houses explode and they melt their skin off when they try to make solvent-based extracts at home.

We don’t think you’re the type to try to do this at home, but just in case you are, we’re not going to get thorough with the details of how solvent-based extracts are created. Think of your friend who got too many ideas from watching Jackass. He’s the guy we don’t want to encourage.

If you want to make an extract at home, hash rosin is perhaps the easiest and safest extract to attempt. All you need to do is wrap your weed in parchment paper and squeeze it between the warm plates of a hair straightener. The resin oozes out of the flower and comes right off the parchment paper. If you’re capable of straightening your hair, you’re capable of making solventless hash. 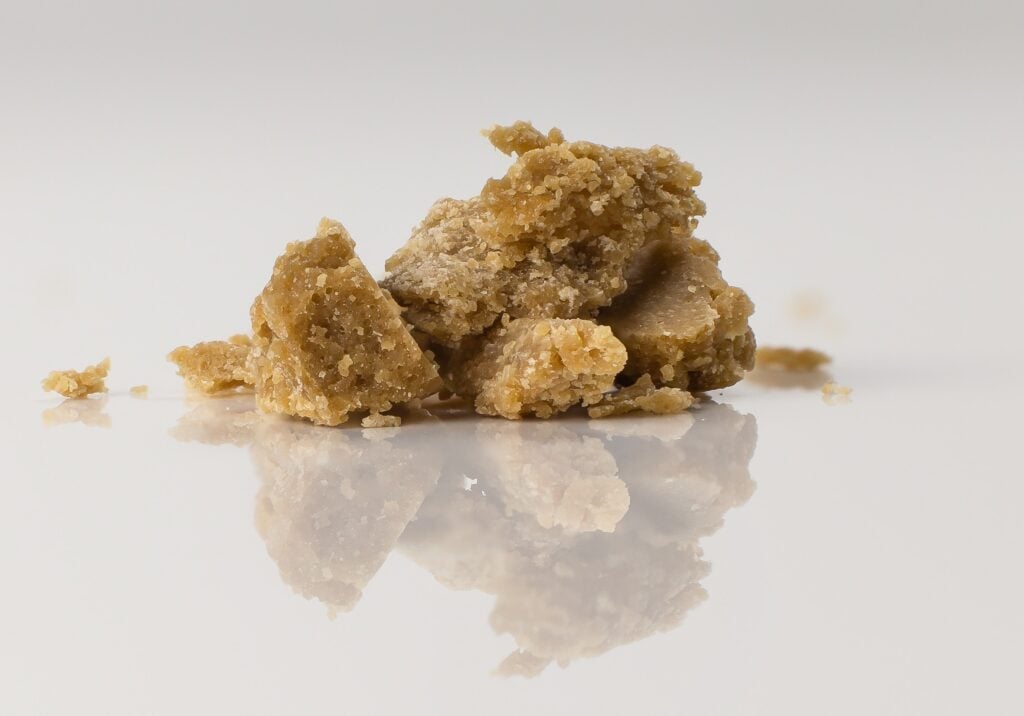 Why is budder so special?

Budder is special because it preserves and concentrates everything in the cannabis flower, including the compounds that would ordinarily degrade or evaporate over the long-term storage of cannabis flower. The cannabinoids and terpenes get trapped in the sticky oil and sealed in an airtight container, making for a tastier and more potent smoking experience.

Budder is particularly great for regular cannabis users. If you’ve been smoking for years, you probably have a substantial tolerance. A one-gram joint of a 20% strain isn’t going to do much for you. A small dab of an 80% THC budder is a completely different story. It will take much less to get you where you need to go.

Since budder is vaporized or dabbed, instead of smoking it, the experience is also a lot less harsh. If you’re tired of knocking down blunts by yourself, budder solves that problem.

What is live budder?

Live budder, or any live cannabis extract, is always the cream of the crop. The majority of cannabis extracts are made from plants that have already been dried and cured. They naturally lose half (or more) of their aromatic, tasty terpenes in the drying and curing process. Live extracts are created to avoid that process.

Extracts are either created as soon as the flower is harvested from the plant, or they’re made from flowers that were quick-frozen right after harvest. The terpenes never have a chance to evaporate. They stick around in the final product, enhancing the overall flavor profile of the extract.

If you constantly find yourself asking how on earth a strain like Wedding Cake tastes anything like Wedding Cake, live extracts will show you an entirely new world. With all of the terpenes present, you’ll get the sweet, doughy, vanilla flavor with a kick of lemon and immediately understand why it’s called what it’s called.

How to use budder

Trying to pack a bowl full of budder isn’t going to get you anywhere. It’s too wet to burn, and you’ll wind up torching it and killing the flavor before you ever have a chance to enjoy it. Some people add a small amount of budder to blunts or joints, but this diminishes the flavor of your budder.

If you want to enjoy budder for all its worth, you need to dab right. A low temp dab helps to preserve the flavor of your budder by rapidly vaporizing it without applying direct heat.

THC budder is a more potent way to enjoy your favorite strain. There’s a form of cannabis extracts for everyone. Whether you prefer solventless extracts or live cannabis resins, you can find a budder that will meet your needs. It’s very tasty, and it packs a substantial punch.

Emjay offers a whole host of cannabis extracts for delivery. You’re only half an hour away from experiencing some tasty budder firsthand. Take your dab rig out of the closet and get some snacks ready. We’re only a few minutes behind you.