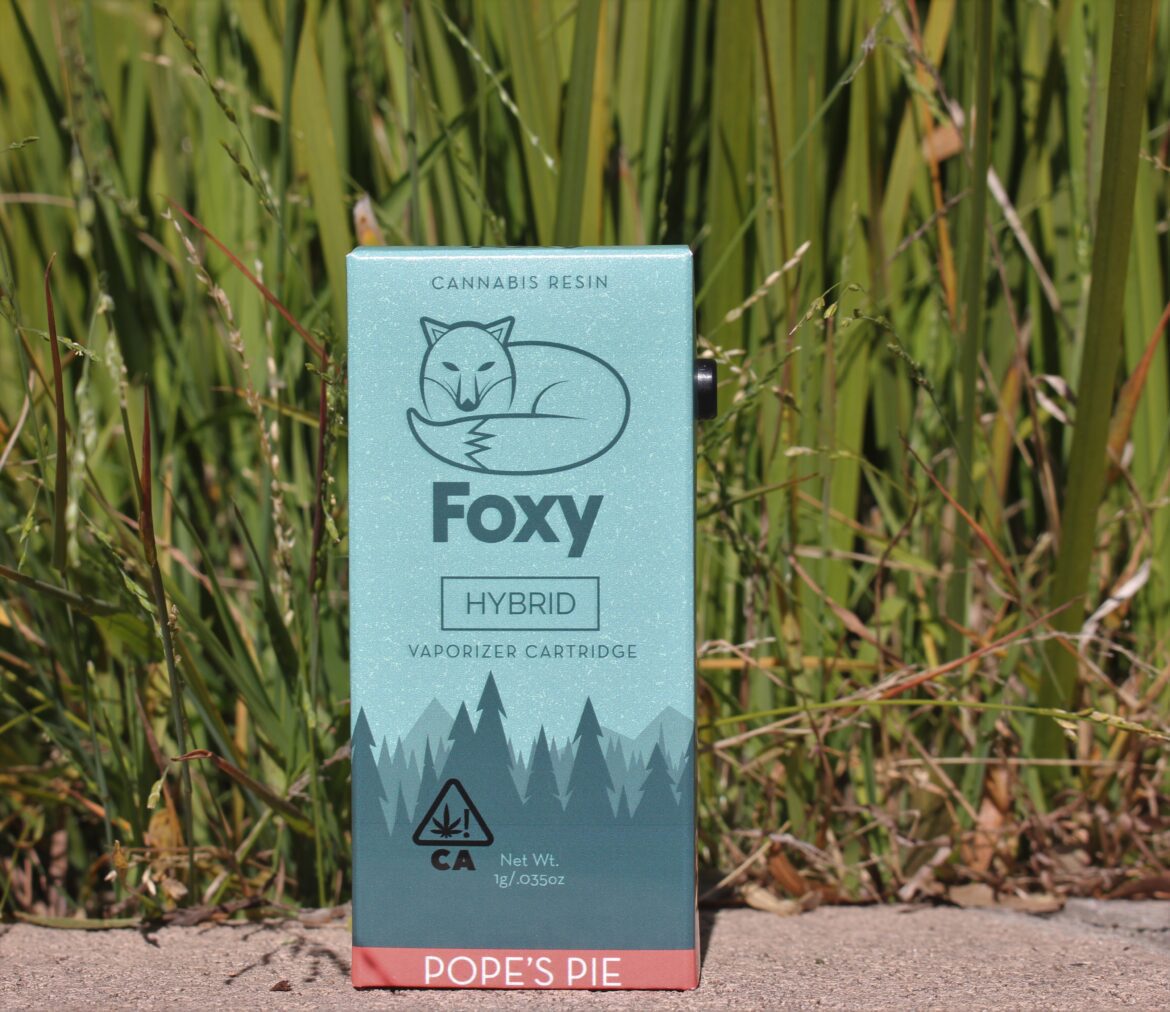 $34 is around the range most half gram vapes go for. Getting a full G for that price is awesome.

Bless yourself with a clever addition to the cannon with Foxy Pope's Pie 510 Vape on Emjay.

Foxy’s website left me completely underwhelmed when I first happened upon it in October of 2021. And frankly, I went into reviewing their massively rich 44% THC Ice Cream Sandwich with low expectations. I couldn’t be happier to tell you how fully I was proved wrong. Foxy leaves the focus on the flower and leaves the web design to the eggheads. Since then, Foxy’s expanded their flower offerings and branched off into pre-rolls and the vaporizers we’ll discuss here. Innovation sits squarely at the forefront of this foxhole with a distinctly unique roster of strains in an array of interesting parentage combinations.

From Pink Ape to Cherry Danish and Motordawg, Foxy provides a wide range of flavor and aroma options for their flower while also providing those expanded options in their vape game. Foxy’s tried and true 510 cart comes in what they describe as “liquid diamonds” -a new buzzword popping up with increasing popularity in the extract and extract adjacent game.

My understanding of live resin diamonds is that they are solely defined by a texture and appearance parallel to their namesake. Thus in a liquid format, it seems to me those are diamantes no more. Foxy’s website steps in to explain that these Liquid Diamonds are “a breakthrough in cannabis tech that melts THCa crystals down to 100% pure cannabis oil. [That is then] blended with High-Terpene Extract and cannabis-derived terpenes”. If you’re still uncertain what that means pick up a paddle, friend that’s you and me in the same boat.  I find it interesting that this definition draws no direct connection to the cannabis plant but the proof of the pudding is in the eating and so it seems the proof of the Pope’s Pie will be in the vaping.

Pope’s Pie crosses Biscotti with Sherbinski’s original forever bae Sunset Sherbert. And the naming carries with it millennia of socio-religious cultural baggage. Whether it’s the troubling “absolution” of inaction in the face of rampant sexual abuse as portrayed in “The Last Pope” or the openly power-hungry, tax-sheltered money grab of The Vatican’s twisted reality in HBO’s “The Young Pope” and “The New Pope” series or you know centuries and centuries of genocidal, femocidal, White Supremacist, anti-queer application in this country- referencing the Pope means much more than a pointy hat and a sweet ride.

Dr. Martin Luther King Jr. famously noted 11 o’clock Sunday morning as our country’s most segregated hour. And still today church-going remains one of the most segregated aspects of American life. Although a myriad of other factors contributes to this division, it is telling that the physical manifestation of Christianity does not undo the pernicious impacts of White Supremacy but instead reinforces them. The very same religion that originated the concept of “Sunday’s best” by allowing enslaved people only “God’s day” for participation in civil society outside the plantation was also patient zero for maliciously and intentionally spreading both Puritanical hegemony and infectious disease to eradicate Indigenous traditions and lives.

I attended a lecture recently where a speaker who dedicated her life to the study of Aramaic advanced the theory that the Bible’s original text is actually a collection of stories on awakening consciousness akin to how a Buddhist might speak of Enlightenment. As renowned spiritual teacher, Adyashanti explains “waking up” is no picnic: “Make no mistake about it – enlightenment is a destructive process. It has nothing to do with becoming better or being happier. Enlightenment is the crumbling away of untruth. It’s seeing through the façade of pretense. It’s the complete eradication of everything we imagined to be true.” In other words-a death or crucifixion of sorts offers the opportunity for resurrection beyond this death into greater compassion and humanity.

If we can reclaim the Pope’s Pie for our personal elucidation and elevation with Foxy maybe there is an opportunity for us to slowly snatch away other aspects of our natural inheritance from his gilded, gaudy, heteropatriarchal clutches as well. 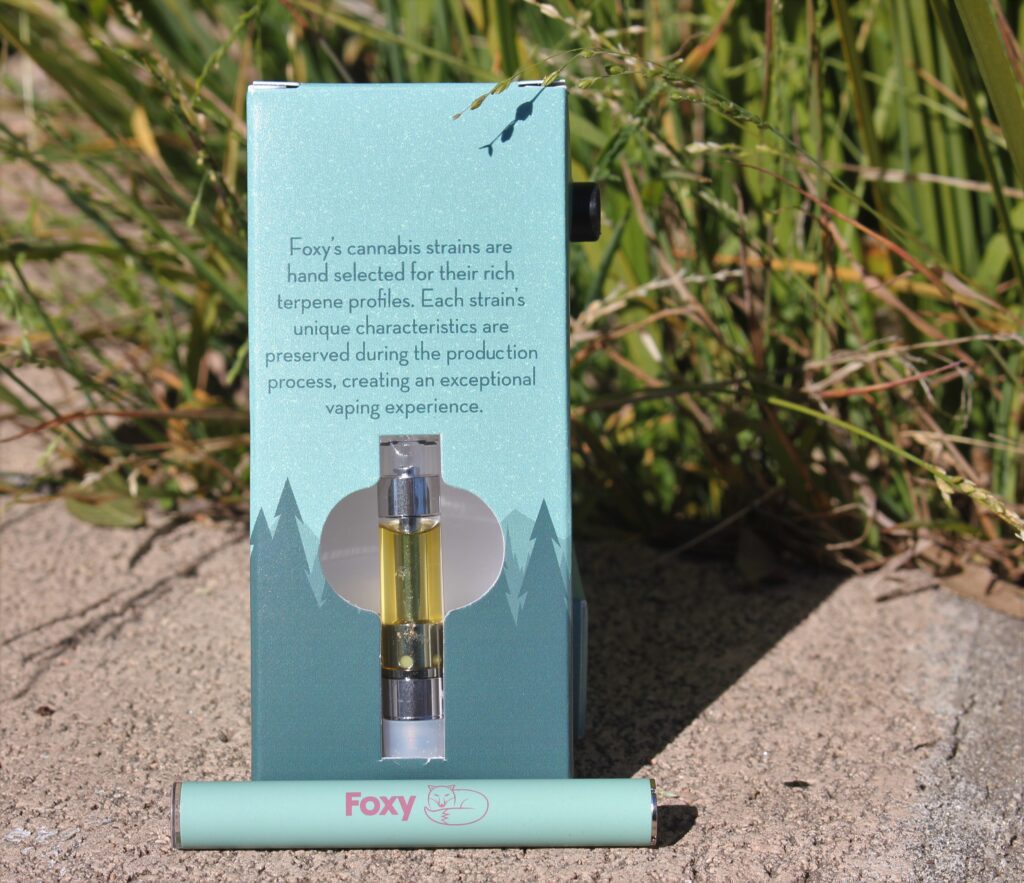 With great excitement to deep dive into the magical forest the packaging promises, I want Foxy’s titular lupine to be my new best friend. Although minimalist, the aesthetic communicates an entire atmosphere effortlessly. Maybe it’s the coziness of the eponymous critter or the twilight-colored palate among the dense majesty of the trees but the world Foxy inhabits is a place I want to be. Smooth unassuming earth tones are not the predominating color scheme on dispensary shelves and something about going with an understated look speaks to a sense of safety.

Although the notion and definition of “liquid diamonds” and of course, the entire existence of a little old man to lead a “this is FOR SURE the only right way to God” Gold City is profoundly and fundamentally hella sus, maybe there’s more to be trusted when this little Foxy friend gets involved. The oil looks clean and viscous and within the color range, I prefer the wide range of dabble offerings these days. The matching battery adds a pleasant addition to the aesthetic appeal and although you can use this Foxy cart with any 510 you please, in my book it does add some extra credit for the matching set.

Releasing the cart from the packaging and removing the plastic stopper, unveils a bright citrus weed-iness reminiscent of most of our favorite hoodies. Screwed into the branded 510 battery Foxy earns her designation and hits just as beautifully. I was surprised to find the battery comes without a button to initiate the inhale. Although it took me longer to remember how to work these things without them, the flavor also added to the breath of fresh air once I figured it out. The cover art is absolutely honored and summoned with the Evergreen-adjacent taste of Foxy’s vape.

I prefer my concentrate and/or vape inbreath to be as light as possible. Both because it feels healthier and in practice often lends itself to getting much higher much faster than you expected. Perhaps it’s just me, dear reader, but maybe some of you can relate-absent a heavyweight knock out any inkling of highness instantly makes me more awake in a certain sense. Perhaps it’s just my inner Rue Bennet in the mood to “just smoke a little weed” but it seems like cannabis does summon some (barely) latent mischievousness in me. I was ready to head to bed when I first hit the piece but very quickly I wanted to designate as much time as possible for the bejeweled priest.

Based on the language a host of brands are using and not using in regards to their added terpene packages, I think it’s safe to assume that they are not from the flower the actual extract itself comes from nor drawn from any specific strain. Pope’s Pie rings of-lovely, enjoyable but albeit-garden variety weediness. If you’re the type who was never spent more than 10 seconds describing what you want from the budtender this is a perfect choice for you. A few hits in I began to ponder how even if you have the same exact experience with another person there is no guarantee that it will hold anywhere near the same meaning for each of you. I’m not saying Pope’s Pie specifically brought that out but I’m not saying it didn’t.

Anything that comes up during a session of meditation is the meditation. Similarly, whatever arises during the inebriation IS the inebriation. Pope’s Pie is hella spacey and good for big laughs punctuated with “I don’t even fuckin’ know man”.

I was in a terrible mood when I began with the Pope’s pipe and the energy of that heaviness very quickly expanded into a reassuring sigh of relief. Every worry and encumbrance felt lessened and less dangerous. Foxy has nailed a high that is very reassuring and magical within the broad convenience a 510 offers. Human beings and their destiny as humans are both carved by the vibrations of thoughts and emotional sensations we nurture and foster within the body. Pope’s Pie steers both of them back to an abundance mindset and in that very real and undoubtedly true sense, we are healed.

Foxy’s $34 price point put a gram’s worth of good time well within reach.