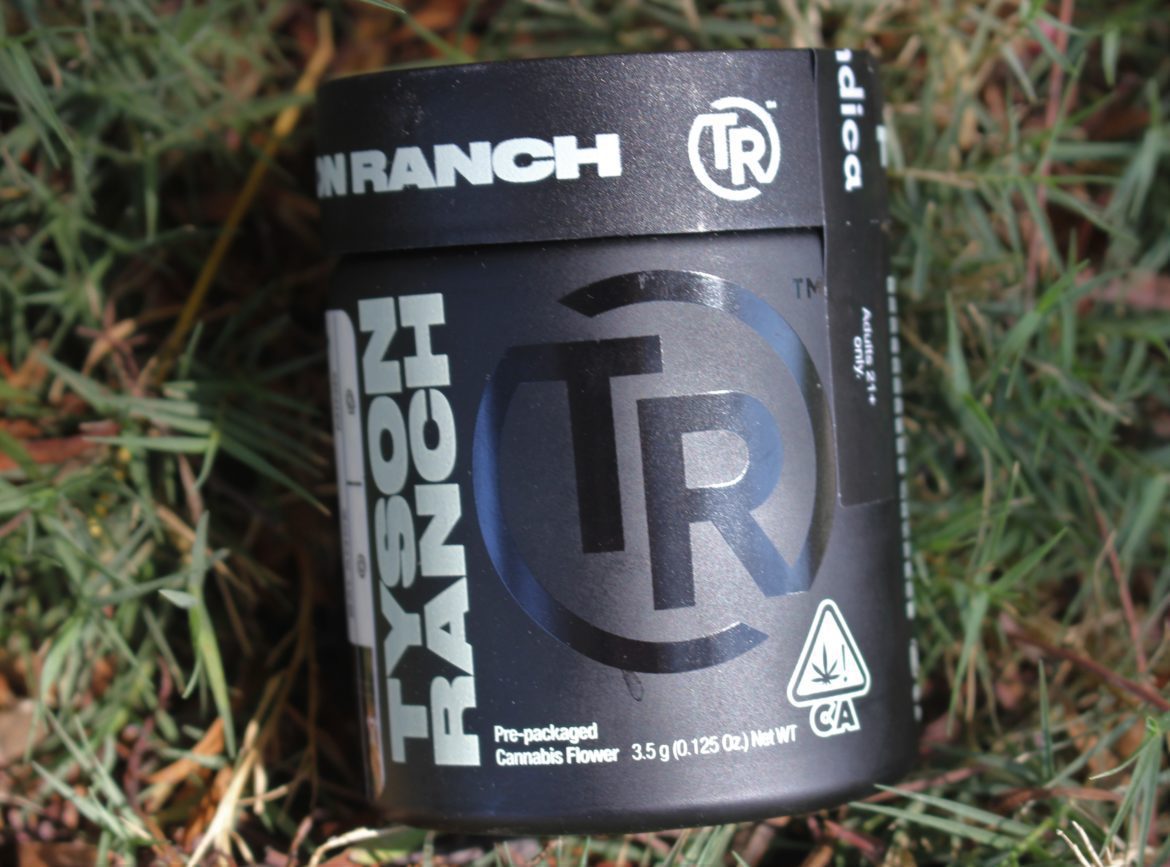 Tyson Ranch continues to evolve it's flower game with the best yet of their high-THC variations on The Toad.

West Coast Toad does right by California beach culture with it's carefree, full body chill to take the day off.

$60 for a heavy-hitting and very pleasant unwind.

Founded in 2017 by Heavyweight Champion fighter Mike Tyson, Tyson Ranch made our Top 20 cannabis brands run by celebrities. Never one to tread lightly, Tyson even wants to open a cannabis-friendly resort in Nevada called Tyson’s Ranch.

As the nation inches closer to ending federal prohibition, the racist and harmful War on Drugs continues to disproportionately imprison and harm black and brown bodies and communities. According to The Last Prisoner Project, while cannabis use is roughly equal among white and black folks, black people are almost four times as likely to be arrested for possession.

As legalized markets begin to offer new economic opportunities, Marijuana Business Daily reports only 4% of cannabis businesses are owned by black folks, with 81% chaired by whites. When cannabis is illegal, black folks take the brunt of the harm. But when cannabis is legal, black people get almost none of the wealth. That is not ok. If a predominantly white industry can rake in millions from cannabis legalization, no people of color should remain behind bars for it.

Whatever your feelings on Iron Mike, supporting black entrepreneurship is of the utmost importance within our capitalistic hellscape and it’s a great idea to start with cannabis. Emjay proudly partners with The Last Prisoner Project to undo the harms of cannabis prohibition and it is as easy as pie to round up your purchases with Emjay to support them. Show gratitude for your ability to walk free by puff puff passing it to those who did not get that opportunity.

In an increasingly torrid love affair with Emjay, Tyson Ranch is always amongst our first to sell out as soon as it comes back in stock. From the virally beloved OG Tyson classic The Toad to the more recent spinoff Southern Toad and the adorably named Tadpole smalls, Tyson Ranch x Emjay is a collaboration in the heat of its prime going increasingly in new and exciting directions.

The West Coast Toad is the latest in this amphibian evolution and one that caught my eye immediately. I wanted the freshest, best flower Emjay had to offer so I went straight to the Fresh Drops section at the Sherbinskis Storefront in the famed Fairfax district. Seeing the newest incarnation of my old lime green friend, I wondered where Tyson would take The Toad this time.

Reppin’ the orange sauce and stylings of our very own Mario Guzman by mixing Sunset Sherbert with Motor Breath, the West Coast hasn’t seemed to change the behemoth strength of The Toad’s rambunctious clan. Weighing in at a colossal  36% THC and a jaw-dropping 42.643% cannabinoids, we have the entourage effect to thank for the toad’s deft KO prowess. When all of the plant’s best combos hook up there is no room to make it off the ropes against these hands.

Let’s see if the California coast can add any chill to this spectacularly single-minded sleep aid. 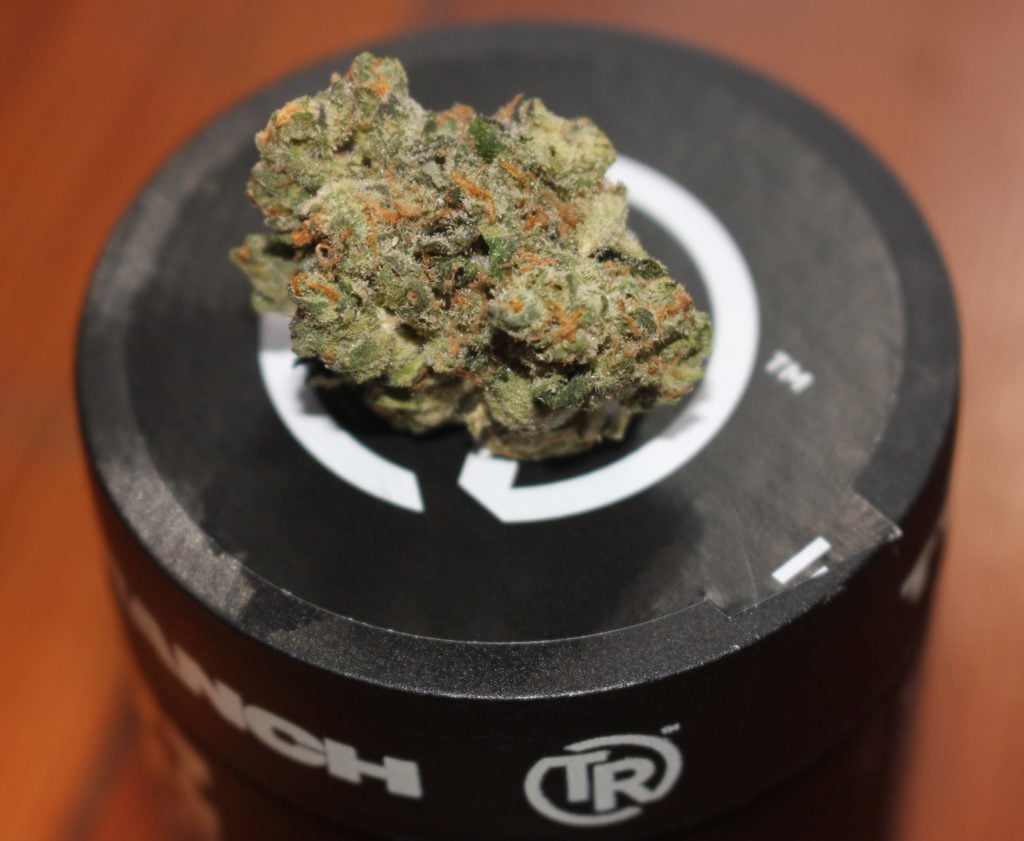 The minimalist black and white packaging reminds me of a high-end champagne with a level of notoriety that does not need ostentatious labeling. This is particularly apparent in the cannabis space where the brightest colors and graphic design often seem to rule the day. A really clean, uncomplicated aroma waits in the jar-lots of earthiness and some spice.  The naming of The Toad series feels eerily on point here–there’s something notably strange and psychedelic about these flowers.

On the West Coast tip, leaves and buds comingle in a pattern that flows like water and seems swept by waves. The geometry feels alien and unpredictable. Lots of unnuanced dark greens underscore an underlying theme of The Toad-a strong, bold, unwavering presence that came to do what it came to do without apology. Plants take on the spirit of their environments and it feels appropriate that this has the name of Heavyweight fighter on its package.

Ground up, The Toad gets a little stankier and seems more approachable with its fuzzy trichomes exposed. The inhale flavor reminds me of skipping class and clam baking a friend’s car in high school. The West Coast does justice to our side with its casual, chill nature. Unlike the label, the smoke itself comes across less as the exclusive members-only vibe and much more so the tried-and-true classic. This is the weed equivalent of only ordering   Jack-n-Coke’s-you know exactly what you’re getting and there’s no need to overcomplicate it.

If any part of your mind, body, or spirit needs to just chill the fuck out for the minute the West Coast Toad can absolutely help you with that. The mind becomes less tense and the body deftly leans into pleasure. This is a great pairing for self-care-lotions, potions, bath bombs, or the ideal for a massage. The world seems more friendly and a lot less serious with the West Coast Toad in tow. Expect to say “dude” a lot and sleep luxuriously. This is a classic stoney experience and my favorite of The Toad series thus far.

High THC bang for your $60 buck.
Get in The Ring: Try Tyson Ranch Here
0 comment 0 FacebookTwitterRedditEmail