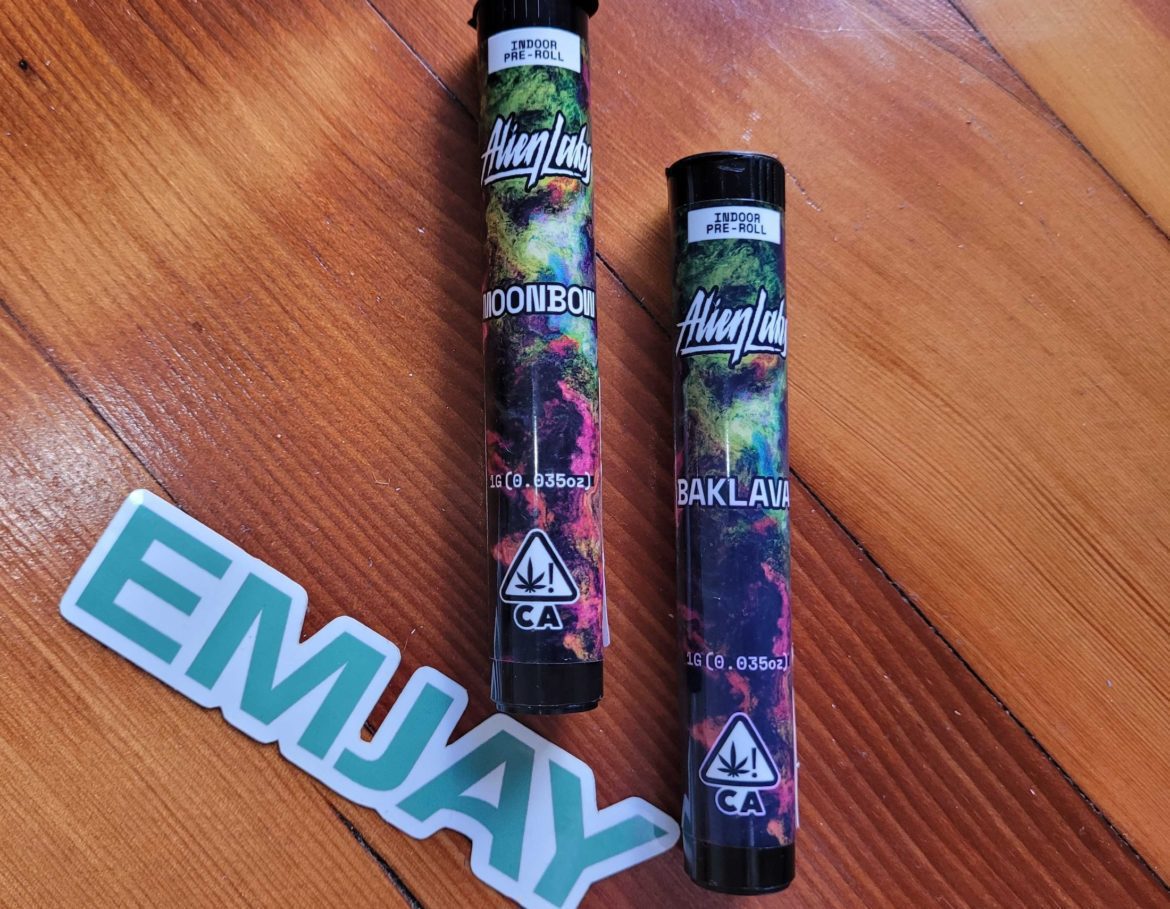 Alien Labs' Prerolls At A Glance

Space out with new wave strains on an old school vibe.

Moonbow pre-rolls from Alien Labs cost $16 at Emjay, occasionally on sale for $12. Other dispensaries sell them for under $20 usually.

You can purchase the Alien Labs lineup of products, including these Moonbow pre-rolls and more, at Emjay.

Alien Labs says they are “Transmitting from 2069”. It’s merch—twentysixtynine.com. The vast expanse of space situates us lightyears away from our nearest neighbors. Even at the speed of light it still takes years for the energy emitted by other celestial beings to reach us. By the time we receive it, we are witnessing the past.

Alien Labs does the righteous work of our cosmic cousins in transmitting cannabis that exists on several timelines—takin’ us back with an old school high but evolving us further with innovative new strains.

Alien Labs’ tees emulate Nietzche: “Time is a flat circle” quoth the Alien Labs. Does all of time exist all at once? Are we bound to repeat ourselves forever? “When you stare into the abyss, the abyss stares back into you.” Nietzche offers the great cosmic Rorschach with his divisive assertions.

What do you see when you look into the unending mystery of infinity?

These are the questions that smoking weed begs us to ask. The cannabis plant blossoms from the magic inherent in the living organism of our Earth. Cannabis is born of the mystical dance between the cosmic energy of the sun, the distinctly Earthling mystery of water, and the remarkable circumstances that brought this planet together in the first place.

Have extra-terrestrial life forms contributed to the evolution of human history? Alien Labs offers its stoney take on the fruits of these cosmic mysteries.

The branding and packaging of Alien Labs is distinctly reminiscent of seminal rave culture. Before the wildfire mainstream popularity and acceptance massives enjoy today, it really meant something to be a raver. PLUR (Peace Love Unity Respect) made raves a safe space to be yourself, the fantasy manifestation of your most magical self, and everything in between.

Alien Labs’ colorful design beams up outsider E.T. vibes for the weirdos, the outcasts, and the misfits.

I had the distinct pleasure of a close encounter of the high kind with two different strains. Baklava offers a mouthwatering fruity and floral earthiness on the nose. Tons of berries with a citrus alley-oop arise off the Kosher Kush x Gelato 41 cross. Moonbow, named to perfection, offers pure cream and a hint of comforting spice on the olfactory. Its lineage is made from Zkittles x Do-Si-Dos. 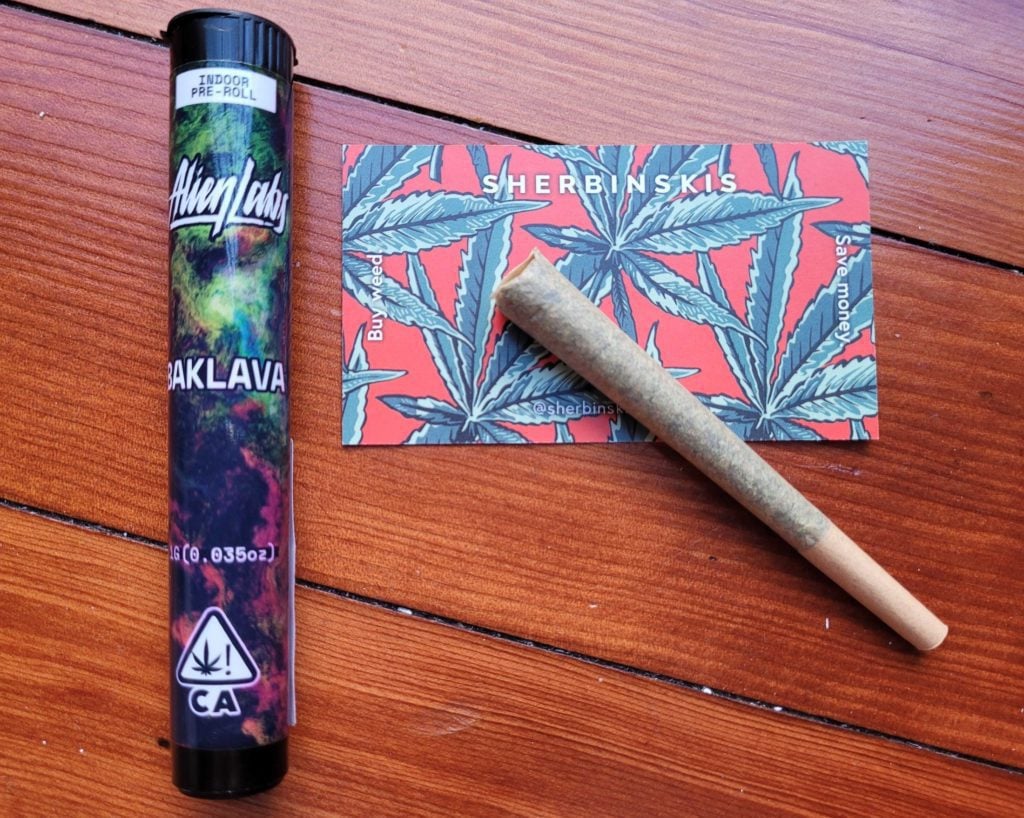 In the best possible way, Baklava is college-age weed. It’s what you smoke before class so you don’t get too high to participate but will for sure say something weird. Its high is uncomplicated and reliable. Served in a classic Raw cone, the preroll doesn’t feel newfangled or overly complex. It is not the flashiest whip, but boy does she drive.

The high sits squarely in the head and becomes more immersively psychedelic as the joint goes on. A sepia filter of nostalgia clings gently to your awareness. The world seems more expansive and loving. Baklava is decidedly contemplative but without forcing you into the depths of rumination. Smoke this to gain a new vantage on problem-solving or to debate a film or album with a friend. Choose something trippy.

Baklava sent me much further into outer space than the 24% THC content promised. I went for a moonlit walk to properly summon the Moonbow. Well with the intention of summoning the Moonbow. Before I accomplished the task, my focus quickly devolved into a Wikipedia rabbit hole. Did you know that Post Malone’s Dad was a DJ who worked for the Dallas Cowboys? Well, now I do.

Reaching into Alien Labs’ test tube yielded a surprising scientific result: I had dropped the mighty Bow somewhere along my long marauding path. To my Fitbit’s delight, I spent the next 6,000 steps or so attempting to retrace my steps. Street after street of failure finally led to the concept of state-dependent memory-the phenomenon making memories easier to recall when the person is in the same state as when the memory was made. To get in touch with my previous self who dropped the joint, I went back to what I was doing at the time and rewatched all his bitch ass music videos again, this time in touch with my internal GPS prompting “getting colder…..getting colder…..getting warmer…..getting warmer….” To my extreme delight a few videos later I found the Alien relic laying unscathed in the street.

With wild sprinklers on every corner, cars whizzing by without pause, errant possum and stray cats abound, it felt like a mystic miracle that Moonbow had survived. Ablaze with triumph and incensed with success, I lit the jay feeling better already.

Moonbow provided much-needed ease in the body. Muscle and mental tension abated and a peaceful calm settled over the senses. This is an obelisk to unwind the day. Will Smith levels of instant mind erasure and Joaquin Phoenix’s open-hearted sign mix into a mellow low-maintenance buzz. Just under 27% THC with a decided body releasing lean this is an ideal nightcap smoke.

For my dollar, it’s Moonbow for me but both proved to be forces of nature.

An extreme bargain for the effect, pre-rolls from Alien Labs cost $16. They are potent, feeling more like a $20-something lift. Catch them on sale for $12 and it’s out of this world.