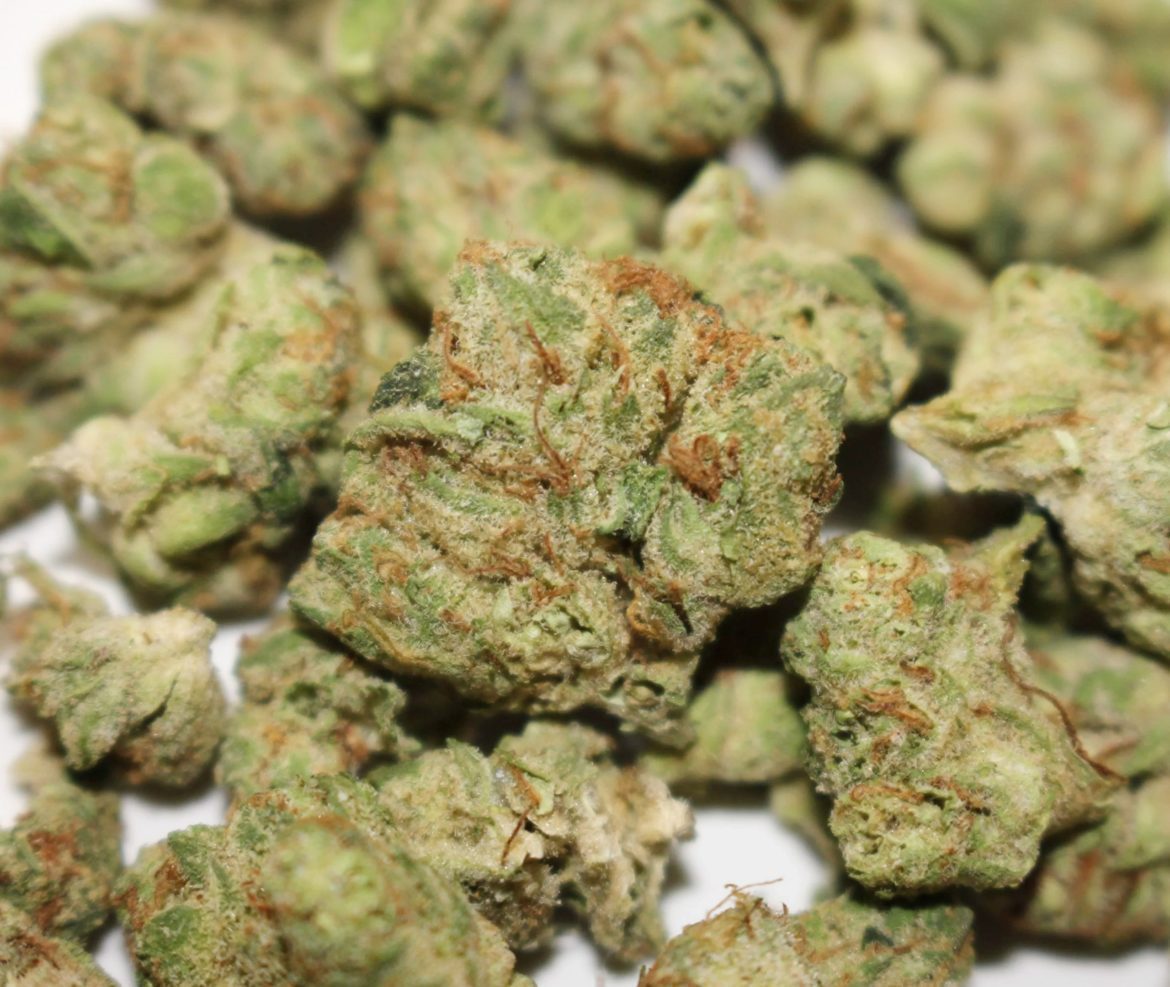 Prepare to shout aloud in joyful disbelief-5 grams of weed this good for $25 is utterly preposterous. Buy it right now.

Don't delay! Skip the nitty gritty and get on with your day with Yada Yada Flower here on Emjay for free delivery.

Self-awareness and intentionality are major turn-ons and in this regard, Yada Yada is downright sexy. “We wanted to make a brand of flower that’s just easy” states the “About” section of their website. And with the finishing punctuation of a judge’s gavel—that’s that on that. Products that are solely what they claim to be (especially in LA’s bloated cannabis market) are hard to find and in that rarity, there is great value.

Yada Yada is for people who just want to grab a bag of affordable weed and waste no more time on it.  The bag reads “easy breezy” and that’s the exact experience it delivers-the bright yellow pops off shelves, the font is pleasantly reminiscent of Abba-Zabas, and if you were watching TV in the ’90s of course you can’t help but think of Seinfeld (more on that later). Yada Yada holds the cannasseiur’s attention with the promise of uncompromised cannabinoid and terp profiles but wants to make sure everyone feels welcome in the rotation with their no-fuss weed.

In the best of possible ways, Yada Yada’s Insta is flat-out bonkers and this adds an additional rich layer of “fuck it” to their sauce. It is really refreshing to see a cannabis outfit that doesn’t overshoot clout, pseudo-day-spa-wellness, or overly manicured cool. It’s just fuckin’ weed, man. Let’s keep it goofy. From Ice Cream Cake to Dosilato to Cherry Glazed and our limelight Cherry Do Si Dos, Yada Yada keeps the squad exclusive and dessert focused (with the exception of everyone’s favorite orangutan adhesive GG4) for a more simplified product line.

Anyone who’s seen the “The Yada Yada” episode of Seinfeld will almost undoubtedly think of that when they look at this. No cap, when my boss assigned me a “Yada Yada Review” I literally thought he was using the expression as a placeholder for a TBD brand. Whether you were just old enough to watch it live on “Must See TV”, just catching its new addition to Netflix, or gathered around the watercooler the day after it came out you understand why it so instantly entered the pop culture lexicon.

If you have never seen Seinfeld and don’t really get what it’s about it is hard to explain in today’s context. In the 1990s Networks (which it is hard to remember now, were some of the very few sources making content) went on a spending spree recruiting Stand Up Comics for sitcoms. Shows like Hangin’ With Mr. Cooper, Ellen, Grace Under Fire, and All American Girl centered storytelling around a real-life stand-up comic playing a fictional version of themselves (in most cases) for wildly predictable laughs.

Seinfeld, however, transcended the situational comedy by going in the opposite direction of its most overused tropes (there’s no sappy music when someone learns a life lesson, nothing is resolved or often improved upon in 22 minutes, no one is a good person, and the plot does not drive the action). The closest contemporary example would be It’s Always Sunny In Philadelphia-everyone is awful, there’s little storytelling, lots of gags, and tons of ridiculous humans (though in Seinfeld much less crudely so).

“The Yada Yada” episode focuses on the practice of making a long story short by skipping over unimportant details. As in “I went to the store, yada yada, got some weed and went home”.  The naming is impeccable given the company’s credo and will be a fun throwback for consumers who laughed along with Jerry and the gang. Through the lens of a more evolved 2021 discourse it feels vital to note: the woman Elaine was based on was a lesbian in real life and that makes the show make much more sense, Michael Richards is a monster and should not be celebrated for anything included his work here (if you google it content warning: racial trauma), and it’s “Must See TV” cohort Friends ripped off the infinitely superior Living Single for massive fanfare it never deserved. 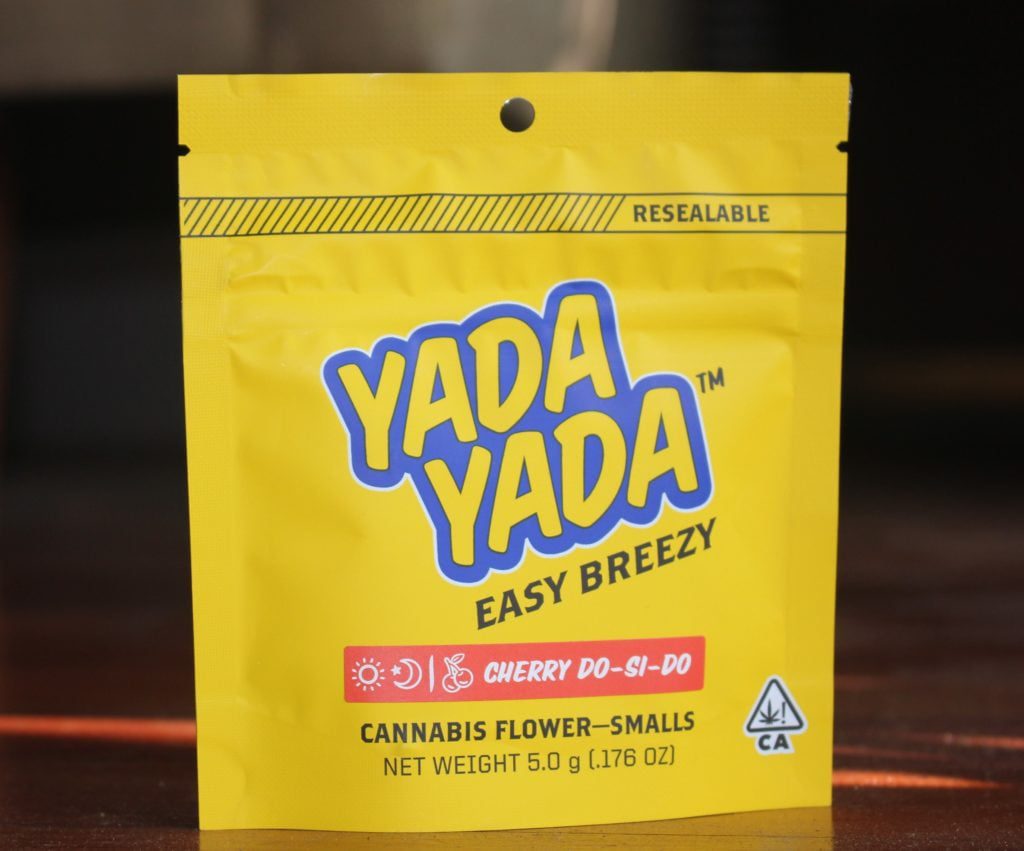 Yada Yada underscores its relevance in your cannabis journey with a highlighter-yellow hue that is impossible to ignore. The Yada Yada lettering is beautiful and the Eazy Breezy subtitle is surprisingly charming. Yada Yada comes in a resealable bag (which I guess they all do) but when you say it like that right out in the open it just makes seem so much more convenient. With a cartoonish snapping motion animated on the back, Yada Yada reads “it’s that kind of easy” in a darling and very endearing splash of personality. Yada Yada has highlighted, underscored, and served a little wink at the end of their problem-solving for you.

Inside the resealable bag, a rich dank aroma finished with cherry awaits. I have no idea what Ron Burgundy’s den of leather-bound books and rich mahogany smells like but my feeling is it’s probably not far from this. If you pour out the bag in childhood delight as I did, you’ll find a terpene shield humidity pack to preserve the flower’s freshness—based on the surprising quality vis-a-vis the price point it seems the packet works. Yada Yada is very generous in what it categorizes as “smalls” as these are the heartiest buds I’ve ever seen underneath that designation.

Trichome retention and the frosting are much higher than you’d expect them to be and it really doesn’t seem they skipped over the fine-tuned details on that. Cherry grinds up into a nice light green with its nice aroma intact. The inhale is surprisingly smooth with a great petrol quality. I’m, quite frankly, stunned by the quality they deliver for the price. Cherry Do Si Dos is really peppy and makes you want to cuddle everything you love in life-it instantly stirs up an appetite for your favorite movies and music.

Cherry has a really stoney mind so avoid public speaking or serious conversation until the buzz wears down. As a matter of fact, don’t do any activity that requires anything of you. This is an unapologetic me time high that allows you the no judgment freedom of being your weirdest self. My bag of Cherry Do Si Dos tested at just under 29% THC and the effects are stronger than they initially seem because they sweet you up so gently. Cherry Do Si Dos is a really good time.

$25 for 5 grams is insane, for this quality, outlandish. You will not find a better bargain than Yada Yada’s 5-gram bags.